Hyundai Motor Co.'s labor union said Thursday that steep auto tariffs the U.S. is considering could cost tens of thousands of American jobs, echoing concerns of the global auto industry as spiraling trade conflicts between the U.S. and other major economies heat up. 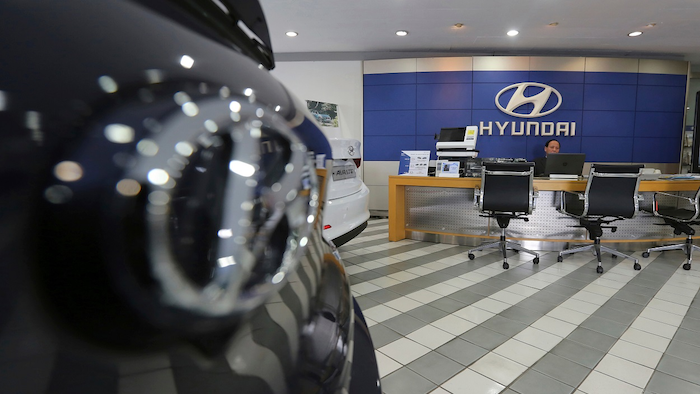 Hyundai Motor Co.'s labor union said Thursday that steep auto tariffs the U.S. is considering could cost tens of thousands of American jobs, echoing concerns of the global auto industry as spiraling trade conflicts between the U.S. and other major economies heat up.

The labor union at South Korea's largest auto company said in a statement that if President Donald Trump goes ahead with imposing 25 percent auto tariffs, it will hurt Hyundai's U.S. sales and jeopardize some 20,000 jobs at a Hyundai factory in Alabama.

The labor union, which has 51,000 members in South Korea, said its contracts with Hyundai Motor mandate Hyundai to shut down overseas factories first before closing its plants in South Korea in the event that restructuring becomes inevitable.

"If South Korean car exports to the U.S. get blocked and hurt sales, the U.S. factory in Alabama that went into operation in May 2005 could be the first one to be shut down, putting some 20,000 American workers at risk of layoffs," the statement said. The union said it expects South Korea to win an exemption from auto tariffs.

The union also said that South Korean carmakers were already penalized during the renegotiations of the bilateral trade agreement. Seoul and Washington agreed to postpone the removal of tariffs on Korean pickup trucks by another 20 years, a measure that the auto industry was unhappy with but won South Korea an exemption from U.S. steel tariffs.

Hyundai Motor is the world's fifth-largest automaker along with Kia Motors.

The U.S. Department of Commerce is investigating whether auto imports pose enough national security threats to justify tariffs. While there are views that the threat of auto tariffs is a negotiating ploy, there are also concerns that the Trump administration could deliver on the threats as it has done with China.

On Tuesday, Washington threatened to impose 10 percent tariffs on another $200 billion worth of Chinese imports, which was immediately met by Beijing's pledge to take "firm and forceful measures" to retaliate. Those moves come on the heels of Washington's imposing additional 25 percent duties on $34 billion of Chinese goods starting Friday, to which Beijing responded by increasing its own taxes on the same amount of American imports.