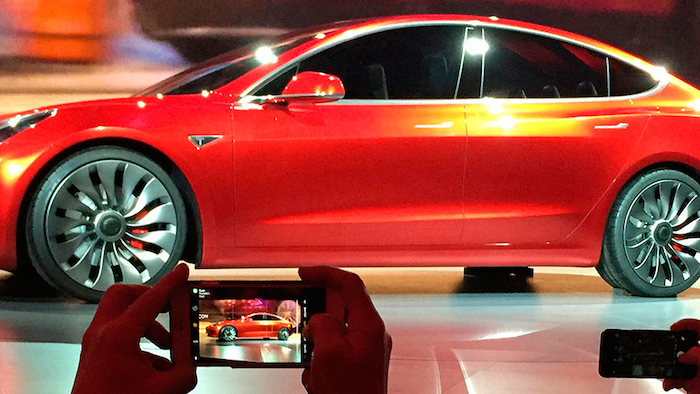 While the magazine said the car has exhilarating acceleration and handling, testers were troubled by its 152-foot average stopping distance from 60 miles per hour in emergency braking tests. The magazine said the distance was worse than any modern car it has tested, and is about 7 feet longer than a Ford F-150, a full-size pickup truck that weighs about twice as much as a Model 3.

Tesla said in a statement that its own tests found 60-to-zero braking distances averaging 133 feet. It says stopping distances are affected by road surface, weather, tire temperature, brake conditioning and other factors. It also says it continually does software updates to improve factors such as stopping distance.

The Model 3 is Tesla's first attempt to appeal to mass-market buyers. The car that starts at $35,000 but can run as high as $78,000 has been plagued by production delays.

Consumer Reports said it tested the car at its track on pavement monitored for consistent surface friction, using industry standard test procedures. The car was tested with the same 18-inch Michelin tires that were used in Tesla's test, the magazine said.

On the first Consumer Reports test, the Model 3 stopped in about 130 feet, similar to Tesla's findings, according to the magazine. But testers could not repeat that distance even after letting the brakes cool overnight, it said.

Because of the inconsistency, the testers borrowed a second Model 3 and got results similar to longer distances in testing the first one.

The Tesla's stopping distance was 21 feet longer than the class average for luxury compact sedans, the magazine said.

Jake Fisher, director of auto testing for Consumer Reports, said the first test shows him that the Model 3 has the mechanical ability to stop in 130 feet and that a software change may bring consistently shorter stopping distances. If that happens, Consumer Reports would re-evaluate the car, he said.

Consumer Reports also said that Car and Driver magazine experienced inconsistent and sometimes long stopping distances when it tested a Model 3, including one stop from 70 mph that took 196 feet.

The magazine also said nearly all of the Model 3's controls are on a center touch screen direction with no gauges on the dashboard and few buttons inside the car. This forces drivers to take several steps to do simple tasks and can cause driver distraction, the magazine said.

The car also had a stiff ride and excessive wind noise at highway speeds, unlike competitors, Consumer Reports said.

Consumer Reports also said it got a record 350 miles of range per charge with a long-range version of the Model 3 when it's set on a high mode to recharge batteries with energy from braking.

The magazine said it took delivery of the Model 3 that it purchased on Feb. 8, and it was the latest model available at the time.

Consumer Reports recommends Tesla's Model S, ranking it No. 1 in the ultra-luxury car category. But its other model currently on sale, the Model X SUV, is not recommended due to low reliability.