Profits have slipped at automaker Volkswagen in the first quarter due to a change in accounting rules, but sales increased and the company recorded no significant additional losses from its diesel emissions scandal. 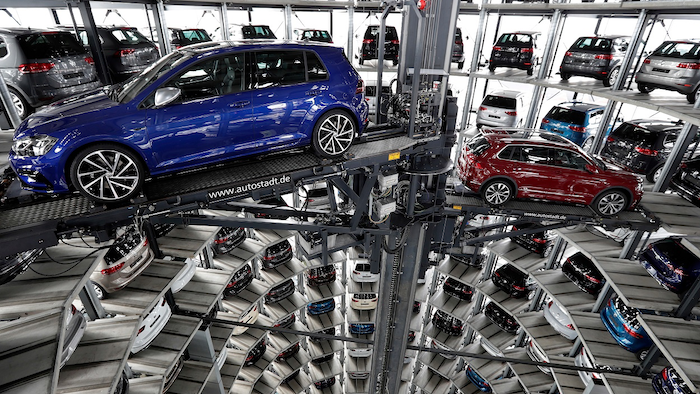 In this March 14, 2017 file photo Volkswagen cars are lifted inside a delivery tower of the company in Wolfsburg, Germany. Image credit: AP Photo/Michael Sohn, file

Profits have slipped at automaker Volkswagen in the first quarter due to a change in accounting rules, but sales increased and the company recorded no significant additional losses from its diesel emissions scandal.

CEO Herbert Diess says the company is "in a robust position" with net cash of 24.3 billion euros in the automotive division. The company took "no significant provision" related to the 2015 emissions scandal. Diess took over as CEO from Matthias Mueller on April 12.

The Porsche and Audi luxury car divisions were key money makers, contributing 2.2 billion euros in operating earnings, or just over half the profit. Earnings at the mass-market Volkswagen division improved slightly to 879 million euros from 869 million euros.

The operating return on sales — a key indicator of profitability — fell, however, to 7.2 percent from 8.2 percent in the year-ago quarter.

In 2015, U.S. environmental authorities caught Volkswagen using illegal software to cheat on diesel emissions tests. The software turned emission controls on when the cars were on test stands and turned the controls off during every day driving. The company paid billions in fines and penalties to U.S. authorities and several executives were charged with criminal violations. The scandal led to increased scrutiny of diesel emissions and to falling sales of cars with diesel engines in Europe.