Volkswagen Says It's Looking at Changing CEO in Reshuffle 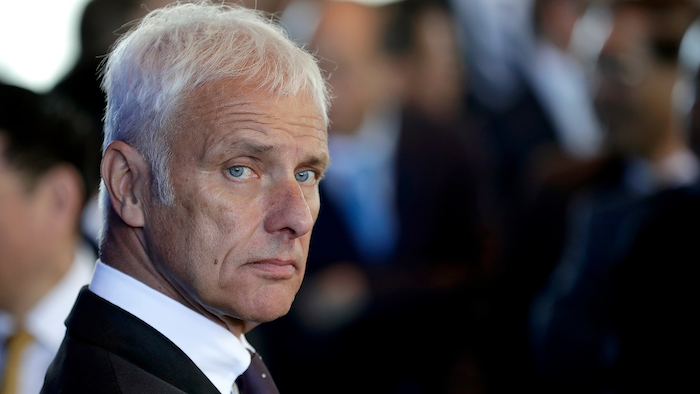 In this June 1, 2017 file photo Matthias Mueller, CEO of the Volkswagen company, attends a contract signing ceremony as part of a meeting of German Chancellor Angela Merkel and China's Premier Li Keqiang at the chancellery in Berlin. Image credit: AP Photo/Michael Sohn, file

The company said it was contemplating a management reshuffle and reassigning responsibilities among executives that "could include a change in the position of the chairman of the board of management," the German term for CEO.

Volkswagen said in a short statement that board of directors Chairman Hans Dieter Poetsch was in discussions with top managers about their duties and that the result was "currently open."

The statement said Mueller "showed his willingness to contribute" to the changes, but stopped short of saying whether Mueller was leaving his current job.

Volkswagen is controlled by the Piech and Porsche families, which have 52 percent of voting rights. The German state of Lower Saxony has 20 percent and Qatar Holding 17 percent.

Mueller, 64, was head of Volkswagen's richly profitable Porsche division when he unexpectedly was handed the CEO job in September 2015. Predecessor Martin Winterkorn fell victim to the company's scandal over cars rigged to cheat on diesel emissions tests.

As CEO, Mueller led Volkswagen through the aftermath of the scandal, which included billions in fines and penalties and U.S. criminal charges against several executives, to record sales and strong profits.

He apologized for the scandal and launched what was described as an effort to make the company's management more open to discussion and less top-down, factors that may have abetted the emissions cheating. But he also faced skepticism about whether he was a credible change agent since he started working for Volkswagen in 1978.

After-tax profit rose to 11.6 billion euros ($14.3 billion) last year, on sales of 230.6 billion euros. The company sold a record 10.74 million vehicles, making it the world's largest carmaker, though the title is disputed by the Renault-Nissan-Mitsubishi alliance, which sold 10.6 million and says Volkswagen is counting trucks that aren't cars.

Diess was regarded as a potential future CEO when he joined Volkswagen in July 2015 after serving as head of vehicle development for BMW. But when Winterkorn fell, he had been with Volkswagen for less than three months.

Since then, Diess has worked to overcome the reputational damage from the emissions cheating scandal, as well as to cut costs and increase profits at the core Volkswagen brand. The company also makes cars under the Audi, SEAT, Skoda, Bentley, Bugatti, and Lamborghini brands.