A faulty Takata air bag inflator has killed another person, this time in Baton Rouge, Louisiana.

The unidentified person is the 20th death worldwide attributed to the faulty inflators, which can explode with too much force and hurl shrapnel into car and truck cabins.

The person died in a July 10 crash of a 2004 Honda Civic. Officials from the automaker and the National Highway Traffic Safety Administration inspected the car Tuesday and confirmed that the driver's air bag inflator blew apart and caused the death, Honda spokesman Marcos Frommer said.

Honda learned about the death only recently, and jointly inspected the car with government officials on Tuesday, he said. Honda did not release the person's name or age.

Takata uses the chemical ammonium nitrate to create a small explosion that inflates air bags in a crash. But the chemical can deteriorate when exposed to high temperatures and humidity and burn too fast, blowing apart a metal canister.

The problem has touched off the largest series of automotive recalls in U.S. history — involving 42 million vehicles and as many as 69 million inflators — and forced Takata of Japan into bankruptcy protection. More than 100 million inflators have been recalled worldwide.

Honda says in a statement that the car's air bag apparently was salvaged from another vehicle, a 2002 Civic. The owners of the 2004 Civic also had been sent multiple recall notices to replace the original inflator starting in June 2014, but the repair had not been made, Honda said.

The company said it is cooperating with the government as it investigates the matter. 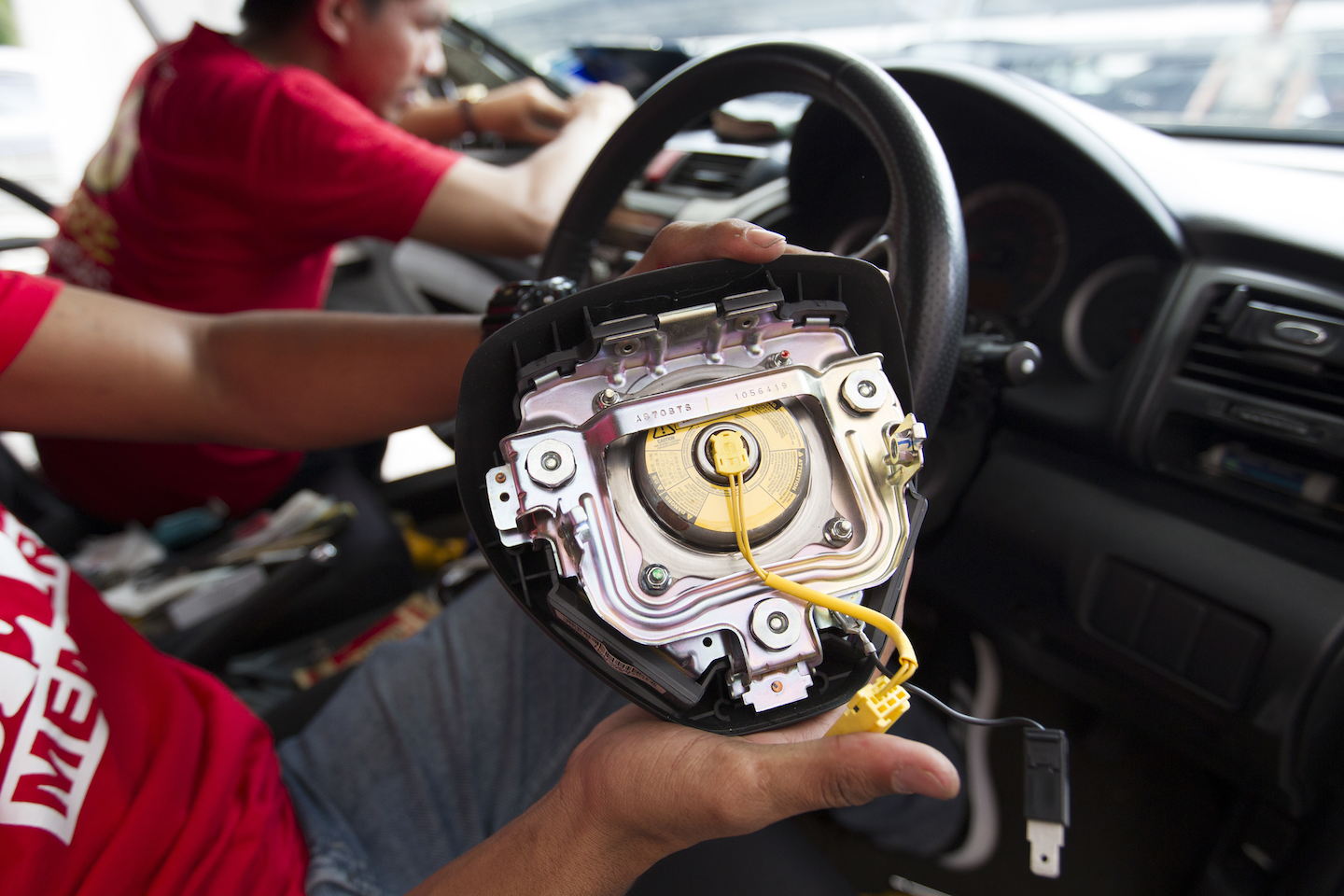 Messages were left Tuesday night seeking comment from a NHTSA spokeswoman and the Baton Rouge police.

The death comes about one month after a report on the Takata recalls shows that automakers have replaced only 43 percent of the faulty parts even though recalls have been under way for more than 15 years.

The report, issued by an independent monitor who is keeping tabs on the recalls, also shows that auto companies are only about halfway toward a Dec. 31 goal of 100 percent replacement of older and more dangerous inflators.

The slow completion rate comes even though NHTSA coordinated the recalls and phased them in two years ago. Before that, the automakers were obtaining parts and distributing them on their own. Normally automakers fix 75 percent of vehicles within 18 months after the recall is announced.

Completion rates vary wildly by automaker, according to NHTSA. Tesla was best at 78.6 percent, followed by Honda at 64.8 percent. Mercedes-Benz was the worst at 2.3 percent.

Honda, which was Takata's largest customer, has been going door-to-door trying to persuade owners to get their cars repaired. The company also is using Facebook in an effort to track down owners.

Frommer said the inflator from the 2002 Civic that was placed in the 2004 Civic in Baton Rouge likely was one of the most dangerous types made by Takata. Such inflators are in 2001-2003 Hondas. Tests have shown they have a 50 percent chance of blowing apart in a crash.

Owners can check to see if their cars have been recalled by going to https://www.nhtsa.gov/recalls and keying in their 17-digit vehicle identification number.

The fugitive wants his dismissal as chairman of the Nissan-Renault alliance overturned.
Associated Press
Feb 10th, 2020