Unlike California, Texas has no obvious restrictions on self-driving vehicles. 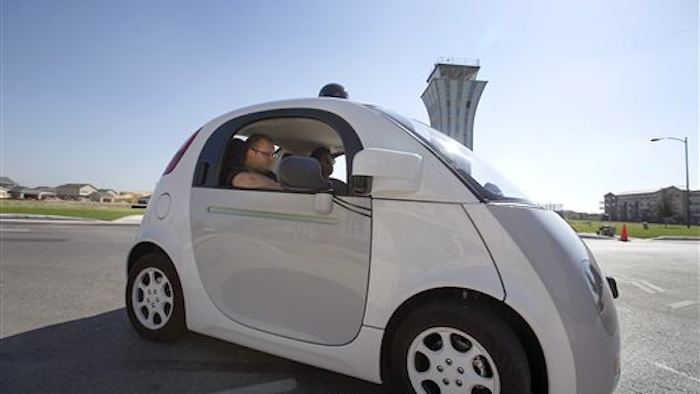 With Google's self-driving cars slowed in a gridlock of California regulation, Texas is offering a fast lane.

Officials in Austin have embraced the technology, a welcome so warm that the mayor used talking points written by a Google lobbyist when the tech titan began testing prototypes on their streets over the summer.

That embrace came as state transportation and safety policymakers are struggling with whether they share Google's vision of — sooner than later — getting the public access to cars that have neither a steering wheel nor pedals.

For now, Google's test cars have an employee in the driver's seat, ready to grab the wheel should the onboard sensors and computers get in trouble. Four retrofitted Lexus cars and four bubble-shaped cars Google commissioned are rolling around Austin, the hub of tech innovation in Texas and the first area Google has done extended testing outside its Silicon Valley base.

Four months into Google's test drives here, Texas transportation officials appear unsure how to oversee their safe operation. Unlike California, where regulators have been drafting regulatory rules to give the public safe access to the cars, Texas has no obvious restrictions on self-driving vehicles.

And Google wants to keep it that way. The tech titan believes vehicles with just a button to start and stop — and no other way for passengers to maneuver them — would be legal without any change to Texas law.

State officials would not comment on their take, but one legal scholar said Google's read of state law was not farfetched. "A reasonable interpretation is that an autonomous vehicle would be legal" in Texas, said Bryant Walker Smith, a law professor at the University of South Carolina.

Officials with Google's self-driving car project say that while they are frustrated California's Department of Motor Vehicles is nearly a year late in writing rules for early-adopters in the public to get the technology, the company expanded testing to Austin to challenge the cars in a new environment where drivers and pedestrians are unaccustomed to seeing them.

"Austin has always been enthusiastic about innovation," said Chris Urmson, who has led Google's self-driving car project for several years. "The people there have been incredibly welcoming."

When Mayor Steve Adler said at an August press conference that the cars potentially carry "enormous" benefits to society, he was reading verbatim from a list of talking points drafted by a Google lobbyist in Texas, Gerardo Interiano, according to records obtained by The Associated Press.

A July press release announcing that Google had picked Austin also attributed a quote to Adler that was first drafted by Google, then approved by Adler's office with only slight tweaks.

"Austin is special in part because we welcome new technologies that could help improve our daily lives, and we can easily see the potential self-driving cars have to reduce accident rates and congestion, and to provide mobility for people who can't get around easily," Adler was quoted as saying.

Jason Stanford, a spokesman for Adler, said the mayor was not aware that Google wrote the material sent to his aides. He said Adler and Google "share this vision" of cars that are never driven by drunk or distracted drivers.

A Google spokesman declined to comment on the emails.

Cars without steering wheels and pedals are not close to being commonplace. Google wants to begin introducing them through a small pilot project, hinting last year that could happen as early as 2016. More recently, Google has refused to discuss a firm timetable.

In the meantime, Texas transportation leaders are reluctant to discuss the technology publicly.

The state Department of Motor Vehicles referred questions to the Department of Public Safety, where a spokesman would only say the agency is working with other states without elaborating. Texas Department of Transportation spokeswoman Veronica Beyer said the agency is waiting on the guidance of lawmakers — but the Texas Legislature doesn't meet again until 2017.

This spring, Google opposed ultimately unsuccessful legislation that would have set minimum self-driving car safety laws. At a legislative hearing, state transportation officials acknowledged there are no existing restrictions, but one Republican lawmaker did voice some concern.

"I'm not sure the state of Texas needs to be providing, become the test tube for developing this," state Sen. Troy Fraser said at the April hearing. "The companies are going to have to figure that out, and then once they figure it out, then they come to us and get authorization."

A signature California company like Google getting cozy with Texas carries an implicit threat: Several companies with high-profile California connections have moved to Texas in recent years, delighting Texans eager to bash California as an overregulated burden to innovative business.

Google said it approached several cities before deciding on Austin. It won't say which ones, though it appears none was in Nevada — the state where in 2011 Google persuaded the Legislature to create the nation's first public road testing framework for self-driving cars. At that time, Google's goal was to get its home state to act. California lawmakers, who worried that Nevada would become a road-testing destination, formally legalized prototype testing in 2012.

Since then, Google hasn't tested much in Nevada.

The leader of the self-driving issues at the Nevada Department of Motor Vehicles said he sees shades of Google's Nevada play in its decision to test in Texas.

"Let's see what politically we can strong arm or influence" in terms of Texas policy, said Jude Hurin. "It's almost the same pattern."