The company began preparing for the brand in 2004. 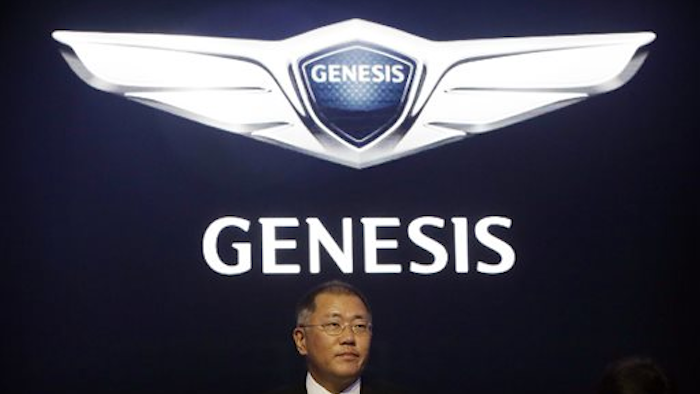 Hyundai Motor Co. said Wednesday it has launched a premium car brand named after its Genesis sedan to boost earnings and its share of the fast-growing global market for luxury vehicles.

South Korea's largest automaker said that the Genesis brand begins with two sedans, including the namesake upscale car launched two years ago and a large flagship sedan slated for release next month.

It will add four more models including a sports coupe and sports utility vehicles by 2020.

The company began preparing for the brand in 2004. Hyundai had planned to launch it when it released the first Genesis sedan in 2008 but postponed because the global financial crisis dented sales of luxury cars.

Hyundai was the only major automaker without a separate luxury brand.

The announcement is a "new start" for Hyundai, said Chung Euisun, a vice chairman and grandson of the company's founder.

Even though luxury cars account for just 10 percent of global auto sales, they set technology and design trends for the overall automobile industry and their sales growth has outpaced mainstream cars.

The move comes after Hyundai's latest quarterly profit slid to the lowest in five years.

Its sales in China dropped sharply this year, like other foreign auto brands in China, due to heightened competition from Chinese carmakers. The automaker's underestimation of strong demand for SUVs and a cheap Japanese yen that boosted rivals Toyota and Honda also contributed to its weak performance.

In South Korea, the company faced competition from German and Japanese cars.