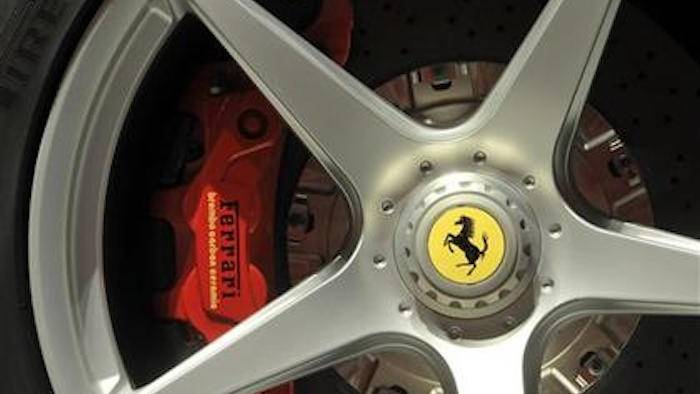 Ferrari is racing toward a public share offering this week, making it possible for investors to buy a piece of the legendary maker of luxury sports cars and Formula One racing machines.

The parent company, mass-market carmaker Fiat Chrysler Automobiles, will float almost a tenth of the company's shares on Wall Street on Wednesday under the stock name RACE.

Fiat Chrysler is hoping the listing will value the company founded in 1929 by Italian sports driver Enzo Ferrariat $10 billion.

The brand, which is based in Maranello, in northern Italy, has grown over the years to become an emblem of high performance and wealth. It has a record number of constructors' world championships in Formula One and its coveted street cars sell for hundreds of thousands of dollars.

The move will raise cash for Fiat Chrysler, the world's seventh largest automaker, to fund its ambitious plans to expand the Alfa Romeo brand and its other higher-margin luxury cars, such as Maserati.

Spinning off a part of Ferrari will also help relieve Fiat Chrysler of some of its debt, as the parent company will receive 2.25 billion euros ($2.55 billion) from Ferrari before the spinoff.

Another key reason: Fiat Chrysler and Ferrari as separate companies are worth much more on the market than as combined entities. And that's good for shareholders, including the biggest one, the Agnelli family.

While the Ferrari public offering comes at a time of slowing economic growth, analysts say the company's cachet and aura of exclusivity should bolster investor interest in the shares.

Just 9 percent of the company is on the market, with another 1 percent reserved for underwriters. It's a rare opportunity for investors to get a piece of Ferrari.

Fiat Chrysler, which will retain an 80 percent share in Ferrari, said it will distribute Ferrari stock to its shareholders next year. The remaining 10 percent belongs to the Ferrari family.

HOW MUCH IS FERRARI WORTH?

Fiat Chrysler said the initial public offering will price Ferrari at between $48 and $52 per share, with the company expected to set a definite price later Tuesday.

That would value Ferrari at around $9.8 billion.

Some experts had estimated the company's value is only half that. But Pierluigi Bellini, analyst with IHS Automotive, said the relatively low number of shares being floated makes it likely that valuation will be reached and could be even 20 percent higher.

In presentations to investors in recent weeks, Fiat Chrysler has been trying to cast Ferrari as not just a carmaker but as a luxury goods company, which tend to have a higher valuation per share.

Fiat Chrysler wants to cash in on Ferrari's racing and supercar cachet along with its lifestyles appeal. Besides cars, Ferrari has an extensive range of branded fashion items as well as a Ferrari World theme park in Abu Dhabi, with another set to open in Barcelona.

HOW IS FERRARI'S FINANCIAL PERFORMANCE?

While Sergio Marchionne, the CEO of Fiat Chrysler CEO and chairman of Ferrari, has lamented the brand's Formula One performance over recent seasons, he can't complain about its financial track record.

Even when Ferrari didn't win on the racing circuit, it has been cashing in profits. Ferrari reported a net profit of 265 million euros (currently $300 million) last year, up 7 percent from the previous year. Its net revenues have grown by 7 percent annually from 2005 to 2014.

It could be Ferrari's moment, with fortunes turning around even on the race track. After being shut out of the winner's circle in 2014, the Scuderia Ferrari Formula One team has won three Grand Prix races this year.

With coupes costing over $250,000 and a special edition hybrid La Ferrari commanding 1 million euros ($1.13 million) — and only available to those who already own a Ferrari — it's no surprise that the market is the wealthiest segment of the population.

The United States is Ferrari's No. 1 market, with about one-third of sales, equal to that of Britain, Germany, Switzerland, Italy and France combined. Greater China is around 8 percent of sales. Ferrari aims to expand in the Middle East as it continues to wean its dependence off its core U.S., German and Italian markets, which just 20 years ago comprised 90 percent of sales.

Ferrari has capped production at around 7,000 units to maintain exclusivity, but analysts expect that to expand gradually as the number of people who can afford a Ferrari is growing globally.