The deceleration is especially wrenching for global brands that are looking to China to drive future revenue. 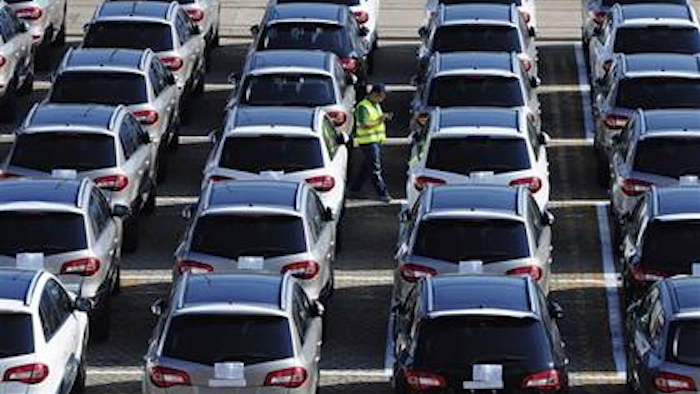 China's auto sales declined in August for a third month but some brands reported gains following a market downturn that shook the global industry.

Sales of sedans, SUVs and minivans fell 3.4 percent from a year earlier to 1.4 million vehicles, according to an industry group, the China Association of Automobile Manufacturers. That dragged down the growth rate for the first eight months of the year to 2.6 percent following declines of 6.6 percent in July and 3.4 percent in June.

China's auto market has been cooling since growth peaked at 45 percent in 2009 but this year's plunge prompted analysts to cut growth forecasts and General Motors Co. and Volkswagen AG to reduce prices.

The deceleration is especially wrenching for global brands that are looking to China, the biggest global auto market by number of vehicles sold, to drive future revenue.

With the Chinese economy cooling, buyers are putting off purchases, said analyst Xu Qian of AlixPartners, a research firm. He said automakers will be lucky if the market achieves single-digit growth this year.

"If the overall economy keeps struggling, we might not even see growth but a decline," said Xu.

Sales also have been dented by measures imposed by Beijing, Shanghai and other major cities to curb smog and congestion by limiting new vehicle registrations.

Total vehicle sales, including trucks and buses, declined 3 percent from a year earlier to 1.7 million, according to CAAM.

Despite the slowdown, automakers are pushing ahead with multibillion-dollar plans to expand production and create models to suit Chinese tastes, adding to competition in a crowded market.

In July, GM announced a $5 billion plan to create vehicles with its main Chinese partner to be sold in China, Brazil, India and Mexico. That came after Ford Motor Co. and a local partner in April committed to spend $1.1 billion on an additional factory in China.

Companies were preparing for slower growth, but the squeeze hit faster than many expected.

In a report last week, research firm Bernstein said China's downturn is so severe that German automakers, heavily reliant on this market, are likely to issue profit warnings in coming weeks.

Analysts had expected growth of 7 to 8 percent this year in Chinese auto sales but after June's contraction, some cut their outlook to as little as 1.7 percent.

Global automakers also face competition from newer Chinese brands that struggled in recent years but have rebounded this year with a wave of new models priced below foreign rivals.

Defying the downturn, total sales by Chinese brands rose 2.5 percent in August over a year earlier, according to CAAM. It said their overall market share expanded by 0.5 percentage points to 39.4 percent.

"I think it's going to be a fierce war between the Chinese local brands and the foreign brands," said Xu.

—GM said sales by the company and its Chinese partners fell 4.8 percent in August from a year earlier to 248,815 vehicles. For the year to date, it said sales were up 2.3 percent over the same period of 2014 at 2.2 million vehicles.