An $800 million Honda plant opening Friday in the central state of Guanajuato will produce about 200,000 Fit hatchbacks a year, helping push total Mexican car exports to the U.S. to 1.7 million in 2014, roughly 200,000 more than Japan, consulting firm IHS Automotive says. 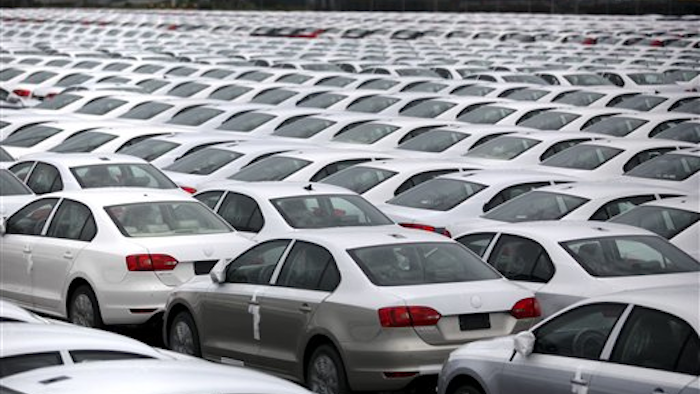 CELAYA, Mexico (AP) -- Mexico is on track to replace the Asian automotive giant, Japan, as the second-largest exporter of cars to the United States by the end of the year.

An $800 million Honda plant opening Friday in the central state of Guanajuato will produce about 200,000 Fit hatchbacks a year, helping push total Mexican car exports to the U.S. to 1.7 million in 2014, roughly 200,000 more than Japan, consulting firm IHS Automotive says. And, with another big plant starting next week, Mexico is expected to surpass Canada for the top spot by the end of 2015.

"It's a safe bet," said Eduardo Solis, president of the Mexican Automotive Industry Association. "Mexico is now one of the major global players in car manufacturing."

Experts say Mexico's relatively low wages, closeness to the U.S. and free-trade deals with more than three dozen nations have made it one of the favorite locations for international automakers to invest since the 2008 global recession and rising energy and shipping prices forced companies to find ways to cut costs.

Despite Mexico's surge, the vast majority of the cars and trucks made in North America, are still produced in the U.S. for domestic consumption and export to other countries. And many of the vehicles built in Mexico are assembled with parts that are produced in the United States and Canada and cross the border without tariffs under the North American Free Trade Agreement.

"There was a realization that there were some structural issues that had to be resolved in the auto industry to make it more competitive again. Moving parts, not all of the production, to Mexico was a good way to deal with that," said Christopher Wilson, an expert in U.S.-Mexico economic relations for the Woodrow Wilson International Center for Scholars.

When NAFTA was signed two decades ago, Mexico produced 6 percent of the cars built in North America. It now provides 19 percent. Total Mexican car production has risen 39 percent from 2007, to nearly 3 million cars a year. The total value of Mexico's car exports surged from $40 billion to $70.6 billion over that span.

Mexico's government and the car industry say the automotive industry has become the primary source of foreign currency for Mexico, surpassing oil exports and remittances from immigrants in the United States.

Each plant opening is lauded by businessmen and government officials eager to promote international investment in Mexico, which is struggling with stagnant economic growth and widespread, persistent poverty. President Enrique Pena Nieto plans to attend the opening of the plant in the town of Celaya along with the economy minister and top Honda executives.

Some people in Mexico worry that the boost in car production is coming on the back of unfair conditions for the country's roughly 580,000 auto workers, whose numbers have risen by 100,000 since 2008. They are paid about $16 a day, which is about one-fifth of what U.S. autoworkers receive. More than half of all Mexican workers earn less than $15 a day, according to Mexico's census agency.

Car factories in Mexico operate with pro-company captive unions and many workers have fought without success to form independent unions that could bargain for higher pay and better pensions, like the United Automobile Workers union that represents employees at U.S. factories owned by U.S. automakers. Foreign-owned car plants in the U.S. are largely non-union, including a Volkswagen factory in Tennessee where the workers last week narrowly voted against representation by the UAW.

"It's one of the most modern industries that is generating the most money for the country," said Huberto Juarez, an auto industry expert at the Autonomous University of Puebla. "It's not right that these workers are making so little."

Solis, the president of the auto industry association, says wages are low compared to the U.S. and Canada, but says the boom is creating a new generation of young engineers and funding automotive research in Mexico.

"It's not only about lower salaries. That's short-sighted. It is a component of a larger equation that has to do with the expertise we are developing," Solis said.

Much of the new production is by Japanese companies drawn by the ability to move parts into Mexico without tariffs. Local governments have been competing for new plants by offering tax exemptions, employee training and improved highways connecting the plants to the U.S. border and Mexican ports.

Just 25 miles from the new Honda plant, Mazda is set to open a factory next week to produce 230,000 cars a year. Nissan is expected to turn out 175,000 cars annually at a $2 billion plant it opened late last year in the nearby state of Aguascalientes. And Audi will be producing luxury models at a plant in the state of Puebla that is slated to open in 2016.

"We have gained momentum throughout the years," Economy Secretary Ildefonso Guajuardo said. "Now Mexico is attracting international attention because it has proven to have quality of production and a friendly investment climate."