A recovery in discretionary income is giving consumers reason to spend more on cars. And despite occasional spikes, gas prices have averaged around $3.50 to $3.60 nationwide for the past three years, a level more and more drivers have grown accustomed to. 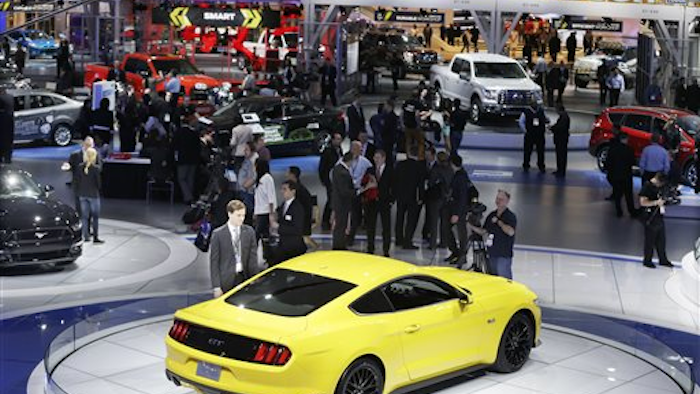 DETROIT (AP) -- People still want to have fun when they drive.

That's the message from automakers unveiling a bevy of performance cars in Detroit this week, such as the Corvette Z06, a trio of BMWs and the Mercedes-Benz GLA45 AMG small SUV. Despite the industry's attention to fuel economy, these cars primarily want to make sure you enjoy the ride.

A recovery in discretionary income is giving consumers reason to spend more on cars. And despite occasional spikes, gas prices have averaged around $3.50 to $3.60 nationwide for the past three years, a level more and more drivers have grown accustomed to.

"Now we have the opportunity that people are going to buy the cars they really desire, that they really want," says Jake Fisher, Consumer Reports' automotive testing director, on the sidelines of the North American International Auto Show.

Fuel efficiency and price are major factors in car-buying decisions, but the improving economy is reinvigorating the market for high-powered cars. And it makes for some striking juxtapositions at the auto show, such as an all-electric version of Volkswagen's compact VW Golf sharing the stage with the Golf R, which features 290 horsepower, 2.0-liter turbocharged engine.

"They're putting in the power," Fisher says. "It's not just the cars that people need."

A common theme among the performance cars shown in Detroit, though, is that power doesn't have to mean pain at the gas pump. Even in its performance incarnation, VW estimates the Golf R's highway fuel economy around 31 mpg with the six-speed manual transmission, up from 27 mpg. Still, that tiny Golf R propels a driver from zero to 60 mph in 4.9 seconds.

"The performance vehicles of today aren't your big, V8 gas guzzlers of the past," says Joe Hinrichs, Ford's head of the Americas. He notes the interest in performance goes beyond traditional sports cars. Ford sells performance derivatives of the Fiesta subcompact and Focus small car.

Ford's iconic performance car, the Mustang, is at the show. The newest version was revealed at a series of events last month. Mustang buyers will have three engines to choose from, including a 5.0-liter V8, with 420 horsepower, as well as some more fuel-efficient options.

Past shows have been no stranger to performance introductions, both production cars and concept vehicles. Just last year in Detroit, Chevrolet took the wraps off its next-generation Corvette Stingray — on Monday the car was honored as North American Car of the Year. The win was followed by Chevrolet unveiling a hot new edition of the Stingray, called the Z06, with a staggering 625 horsepower.

Aaron Bragman, the Detroit bureau chief for the website cars.com, says the new Corvette is an "extraordinary performance value," much like the current version. No prices were released for the Z06, but the previous version sold starting around $75,600 while a Porsche 911 or Dodge Viper starts around $100,000. And such cars help build interest among younger drivers, he says.

"Not everybody wants a family sedan," Bragman says.

Even mainstream cars have performance versions that are selling well. Chrysler, for instance, is coming out with a high-speed version of its new 200 mid-size sedan. And companies known more for affordable offerings, such as Kia, or more conservative designs, such as Toyota, have joined in the performance fray.

Toyota's FT-1 concept sports car emphasizes power and style. The Japanese automaker says the FT-1 foreshadows how it will design cars in the future. And Lexus, Toyota's luxury brand, has its new Lexus RC F coupe, billed as its most powerful V8 performance car at more than 450 horsepower.

Kia showed a concept GT4 Stinger sports car with a focus so big on performance — packing 315 horsepower — that it was conceived without an audio system, with the idea that the sounds from under the hood and exhaust will be enough for the driver. And Acura, Honda's luxury brand unveiled, a prototype of the performance-focused TLX that will appear in a production version around mid-year.

"In the car category, performance is often misinterpreted as mindless pedal to the metal testosterone," said Mike Accavitti, senior vice president, American Honda Motor. "In reality, outstanding performance becomes possible when ... technology enables you to experience the physical sensation of being in total control of exhilarating performance."

Small SUVs are a growing part of the market, stealing sales from midsize cars. Mercedes is showing off the GLA45 AMG, a small SUV that uses a 2.0-liter, turbocharged four-cylinder engine with 355 horsepower. The engine promises acceleration from zero to 60 mph in 4.8 seconds and a top speed of 155 mph.

All these vehicles mean that consumers will be able to soup up their rides, helped by an improving economy. Economists surveyed last month by The Associated Press forecast that growth will average 2.9 percent in 2014. That would be the healthiest annual pace since 2005.

"As we come out of recession ... you see more performance cars," said Jack Nerad, editorial director for Kelley Blue Book. "More people are comfortable with buying sports cars and luxury."