It follows a culture shift in the country that invented the automobile, where cars were once commonly described as the Germans' "favorite child." Excellent public transport, high fuel prices and a strong environmental movement mean that for many Germans the car has become an expendable accessory, or at worst an expensive liability. 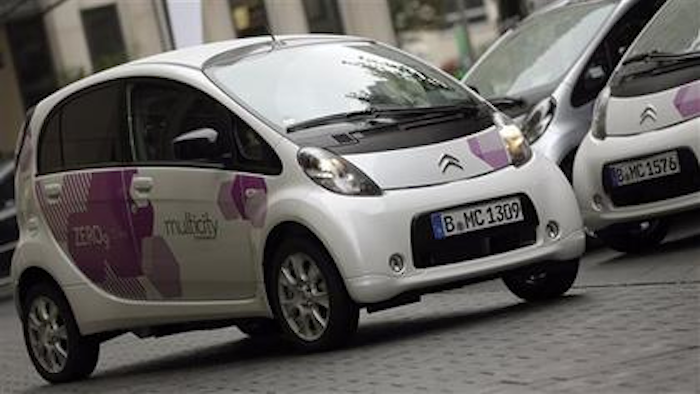 BERLIN (AP) -- Germans, once a nation of ardent automobile enthusiasts, are not buying cars as much as they used to. Instead, they're sharing them.

The country has become the world's biggest user of one-way car sharing plans, where people can find a vehicle using their smartphone, drive it across town and leave it there without having to return it to a central base.

The trend has been boosted by Germany's powerful auto industry, which first ignored the car sharing phenomenon, but is now jumping on board. Some companies are betting big on the idea, not just for short trips within cities, but also for longer ones between them.

It follows a culture shift in the country that invented the automobile, where cars were once commonly described as the Germans' "favorite child." Excellent public transport, high fuel prices and a strong environmental movement mean that for many Germans the car has become an expendable accessory, or at worst an expensive liability.

New vehicle registrations fell below 3 million last year, continuing a two-decade decline. Meanwhile, the average age of buyers rose above 52 for the first time, compared with an average age of 46 in the mid-1990s.

"The young buyers are dying off," said Ferdinand Dudenhoeffer, who heads the University of Duisburg-Essen's Center for Automotive Research.

As a result, the auto industry has embraced car sharing as a means of reaching a younger generation for whom the idea of owning a vehicle is as outdated as their parents' record collection.

"I want to pay for things when I use them," said Martin Blankenstein, a 35-year-old management consultant who uses several different car sharing companies.

For decades such services were station-based. Vehicles could only be picked up in certain places and had to be returned to the same location. But six years ago car sharing took a different turn, with the launch of the first one-way offers.

These flexible services have spread to major cities across Europe and North America thanks to the adoption of smartphones, and have really taken off in Germany, where more than half of all the journeys were booked last year.

Using a mobile app, customers can find a nearby car, book it at short notice, drive it across town and leave it there without having to return to the starting point.

Billing is by the minute. Twenty minutes of use will typically cost 4-6 euros ($5.50-$8.20) with fuel, insurance and parking included. All-day rates range from 39-59 euros for most flexible car sharing services.

What might seem like a costly extravagance for regular users can become attractive for people who rarely use a car. Advocates say the cost tends to be half of what a taxi would charge for the same journey.

On Tuesday, Daimler launched a new option for its Car2Go short-term rental service that allows customers to take one of its Mercedes-Benz B-class vehicles from Berlin to Hamburg, or vice versa, and leave it there.

The move marks a departure for Car2Go, which until now has only offered two-seater Smart cars for its 600,000 customers to zip around within 25 cities across Europe and North America.

Daimler is following in the tire tracks of DriveNow, a joint venture between its rival BMW and car rental firm SIXT, which began offering a similar service between Cologne and Duesseldorf last year.

"We're responding to requests from our customers, who say they occasionally need a bigger car that they can take outside the city boundaries," said Marcus Spickermann, the head of Daimler Mobility Services GmbH, which operates Car2Go.

The success of car sharing in Berlin, with its trend-setting image, has attracted foreign manufacturers such as Citroen. The French automaker launched its Multicity electric car sharing service in the German capital.

Worldwide, over 8.5 million one-way journeys were booked last year. More than 4.5 million of those were in Germany, and 2.2 million — more than a quarter of the global total — were in Berlin, according to Benno Bock of InnoZ, a transportation think tank.

The number of bookings per month reached 250,000 last year, compared with about 40,000 in Washington, DC, the highest figure in the United States.

Spickermann said Car2Go's new intercity service may be rolled out to the rest of Europe and North America in the coming years.

With the share of the world's population living in cities predicted to rise from half to over two-thirds by 2050, Daimler needs to find a way to reach people to whom the traditional model of car ownership doesn't appeal, he said. "Car sharing is a logical step for us, even though it may appear to be a contradiction for a manufacturer."

The move is a risky one. Some experts believe it could backfire on automakers by demonstrating how easy it is to live without a vehicle of one's own — and the insurance costs, repairs and parking headaches that come with it.

Blankenstein, who lives in Berlin, said recent fatherhood didn't change his mind about getting a car: "I ask myself, what do we really need as a family?"

Still, manufacturers may have no choice than to follow the trend, for now.

"Many of them don't know in which direction the market is heading, but they don't want to be on the wrong track when change happens," says Kurt Moeser, a historian who specializes in transport at the Karlsruhe Institute of Technology.

"Mercedes is doing something completely counter-intuitive for its own business model by offering people cars they don't need to own," he said. "This could be quite dangerous. On the other hand, once a trend becomes clear it might be too late to jump aboard."