Volvo CEO Olof Persson said the job losses, which include the previously announced reduction of 2,000, will affect employees worldwide in group truck operations, as well as in technology, sales, marketing, IT, finance and human resource departments. 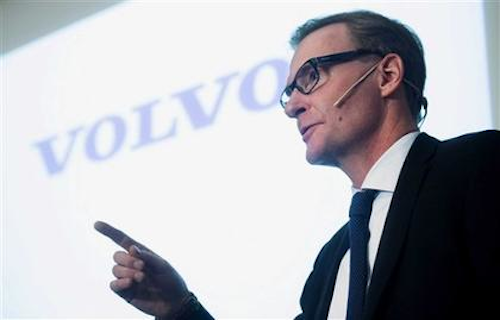 STOCKHOLM (AP) -- Truck maker AB Volvo said it plans to lay off 4,400 employees this year as it revealed a 37 percent slide in fourth quarter profits.

Volvo CEO Olof Persson said the job losses, which include the previously announced reduction of 2,000, will affect employees worldwide in group truck operations, as well as in technology, sales, marketing, IT, finance and human resource departments.

Persson said the cuts will help Volvo use its resources more effectively and are a consequence of the company's transformation. The reductions will start immediately and are expected to be largely completed during 2014.

The job losses came as the company reported net profit of 548 million kronor ($84 million), down from 869 million kronor a year earlier. The fall was largely due to the extra costs involved in updating its trucks.

The profits decline came despite an 8 percent rise in sales to 76.6 billion kronor and a 15 percent increase in truck deliveries to slightly more than 61,000 trucks. The pick-up in deliveries was driven by demand in North America and Brazil, as well as acquisitions in Europe ahead of the transition to tougher emission regulations.

Despite the profit decline, the company maintained its dividend at 3 kronor per share.

Shares in Volvo rose by 4.9 percent to 89.7 kronor in early trading on the Stockholm stock exchange.