Ford isn’t resting on its laurels after unveiling the Ford Fusion Hybrid research vehicle last month — earlier today it announced new projects with the Massachusetts Institute of Technology and Stanford University to do some R&D on the biggest concerns and challenges surrounding autonomous driving. 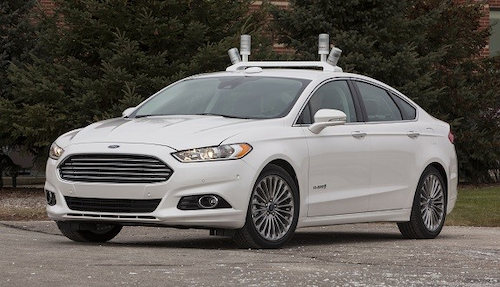 Ford isn’t resting on its laurels after unveiling the Ford Fusion Hybrid research vehicle last month — earlier today it announced new projects with the Massachusetts Institute of Technology and Stanford University to do some R&D on the biggest concerns and challenges surrounding autonomous driving. That means everything from better detection technology to the legislation necessary to make them a reality, and even the so-called societal impacts that cars without human drivers could have.

The company has previously outline a Blueprint for Mobility that outlines what transportation will look like in 2025 — autonomous driving is just one change, albeit a critical one, that the company expects in the next decade.

Paul Mascarenas, the chief technical officer and vice president of Ford’s research and innovation team, says, “Working with university partners like MIT and Stanford enables us to address some of the longer-term challenges surrounding automated driving while exploring more near-term solutions for delivering an even safer and more efficient driving experience.”

Ford is currently using LiDAR sensors to generate a real-time 3D map of a vehicle’s surrounding environment, and the collaboration with MIT aims to bring more advanced algorithms for predicting vehicle and pedestrian movement into the existing system. With better predictive tools, the vehicle would be able to better path away from such objects. LiDAR, at its core measures the distance between the sensor and a target — in this case — just about anything in the vicinity, by using a laser and analyzing the light reflected back.

And with Stanford, Ford wants to know how sensors could see around obstacles like a big-rig truck. Typically, if a driver can’t see around a big object, they’ll pull further ahead. But if a sensor could do exactly that, it wouldn’t need to creep into a pedestrian walkway, for example — it would have already figured out that traffic was too heavy to merit even trying to make a right-hand turn.

Ford says it’s trying to outfit their vehicles with some of the same “common sense” that drivers intuitively offer while operating a car. And with any luck, autonomous cars will someday eliminate some of the less-than-smart things drivers do on a daily basis.