Volkswagen of America, Inc. today announced that the 2015 Golf and 2015 Golf GTI have been named the 2015 North American Car of the Year. The Golf and Golf GTI were recognized for setting new benchmarks in their segments, including innovation, distinguished design, and available driver assistance features, as... 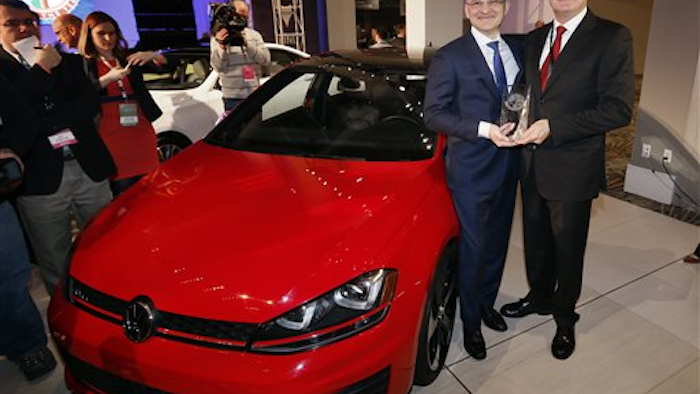 Volkswagen of America, Inc. today announced that the 2015 Golf and 2015 Golf GTI have been named the 2015 North American Car of the Year. The Golf and Golf GTI were recognized for setting new benchmarks in their segments, including innovation, distinguished design, and available driver assistance features, as well as unmatched value. The cars beat out two other finalists, vying for the award in the 22nd annual iteration of the prestigious award.

"Volkswagen is thrilled to start 2015 with the Golf and Golf GTI taking home the incredible North American Car of the Year title," said Michael Horn, CEO, Volkswagen Group of America, Inc. "This award highlights our achievements and hard work in the past year, and we are confident that the Golf family will continue to pave the way for the brand in the year ahead."

The coveted 2015 North American Car of the Year award joins the list of a dozen accolades awarded to 2015 Golf models to date.

The Golf family will soon welcome two new additions: the all-new 292-horsepower, all-wheel drive Golf R, which sold out a pre-order of 500 units in less than 11 hours; and the TDI® Clean Diesel and turbocharged 1.8-liter TSI® Golf SportWagen models that go on sale in the spring.

The North American Car and Truck of the Year awards are announced each year at the beginning of media week at the North American International Auto Show (NAIAS) in Detroit. In 2015, 57 North American Car and Truck of the Year jurors from newspapers, television and radio stations, magazines and websites across the U.S. and Canada weighed in to select the vehicle that most exceeded expectations in all areas, ranging from design and safety to innovation and economy. Three finalists are winnowed down from an expansive list of all-new or significantly redesigned cars introduced in the past year. All ballots are sent directly to and calculated by Deloitte & Touche.