Ford said that its new aluminum-bodied F-150 pickup will get up to 26 mpg on the highway, making it the most fuel efficient gas-powered full-size pickup. The Ram truck is the current leader among pickups, getting up to 25 mpg on the highway with a gas engine. The Ram gets up to... 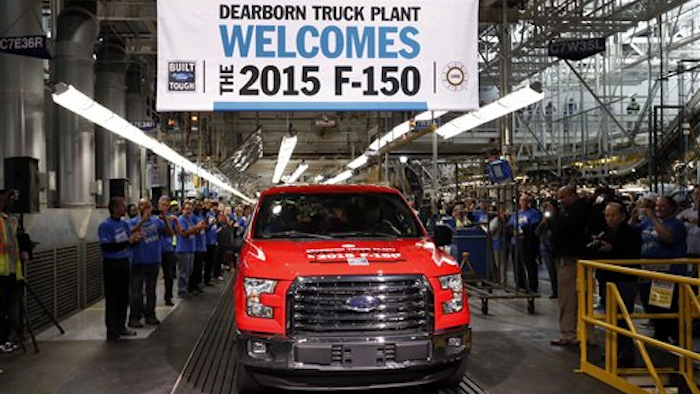 Ford said that its new aluminum-bodied F-150 pickup will get up to 26 mpg on the highway, making it the most fuel efficient gas-powered full-size pickup.

The Ram truck is the current leader among pickups, getting up to 25 mpg on the highway with a gas engine. The Ram gets up to 28 mpg with a diesel engine; Ford doesn't make a diesel version of the F-150.

Fuel economy is a key selling point for the new F-150, which is arriving at dealerships this month. Ford shaved 700 pounds off the weight of the truck by switching the body from steel to lightweight aluminum, a dramatic change for the best-selling vehicle in the U.S.

Some analysts thought the truck might even top 30 mpg after Ford's multi-billion dollar investment to develop and produce it. The final figure met Ford's expectations of a more modest improvement, and represents 13 percent greater fuel economy than the current F-150.

With gas now averaging $2.84 per gallon, the aluminum F-150 will save the average buyer only $100 to $200 a year in fuel costs over competing gasoline models from General Motors and Chrysler, said Larry Dominique, president of the ALG auto forecasting firm.

Doug Scott, Ford's truck marketing manager, said the majority of truck customers aren't solely focused on fuel economy. The new F-150 beats its rivals in both towing — of up to 12,200 pounds — and payload of up to 3,300 pounds.

Dominique agrees that buyers will focus on the total package. "The payload, the towing. Those aspects of it plus a little bit better fuel economy is definitely an increased value," he said.

Patrick Caraher, a relocation specialist at ALE Solutions in Phoenix, said he expected higher fuel economy. But he still plans to buy a new F-150 sometime in the next year.

"Losing 700 pounds on the truck is enough for me," said Caraher, 29. "Less brake, tire and shock and suspension wear is where I take my benefits."

The F-150 will get 26 mpg on the highway with a 2.7-liter EcoBoost engine, which Ford believes will account for 28 percent of sales of the new truck. The top highway fuel economy of the current truck is 23 mpg.

The company hopes the new truck's advantages outweigh customer doubts about the durability of aluminum or potential repair costs for the pricier metal.

It's a big risk. So far this year, one out of every three vehicles Ford sold in the U.S. was an F-Series pickup. It's been America's best-selling vehicle for 32 years.

Ford also provided the fuel-economy breakdown for other engine types:

— The base F-150 with 3.5-liter V6 engine gets 25 mpg on the highway, or 20 mpg in combined city/highway driving. This version is expected to be 16 percent of sales of the new truck.

— The 3.5 liter EcoBoost V6 gets 24 mpg on the highway, and 20 city/highway combined. Ford expects this version to make up 28 percent of sales.