Ford Motor Company today announced the addition of 850 new jobs at its historic Ford Rouge Center, comprised of the Dearborn Truck, Dearborn Stamping, and Dearborn Diversified facilities. The new jobs will support production of the all-new 2015 F-150 launching in a matter... 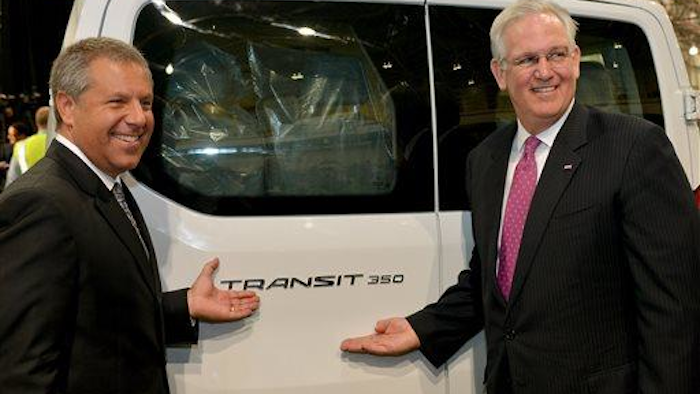 Ford Motor Company today announced the addition of 850 new jobs at its historic Ford Rouge Center, comprised of the Dearborn Truck, Dearborn Stamping, and Dearborn Diversified facilities. The new jobs will support production of the all-new 2015 F-150 launching in a matter of weeks.

“As customer anticipation for the all-new F-150 continues to build, today we are bringing on 850 new jobs to help meet the market demand for the toughest, smartest, most capable F-150 ever,” said Joe Hinrichs, Ford president of The Americas. “The new truck sets new standards for the future of tough – right down to how it’s built.”

As a part of the launch of the all-new F-150, Dearborn Truck Plant recently underwent the largest manufacturing transformation in decades, replacing legacy manufacturing equipment with the latest in production technology. This transformation marked the first major renovation of the iconic facility since it opened in 2004. In addition, the Ford Rouge Factory Tour is currently undergoing a complete renovation with new films, exhibits, and hands-on experiences tied to the new vehicle.

“Today we celebrate the commitment to excellence that the hardworking men and women of the Rouge demonstrate every day,” said Jimmy Settles, UAW vice president and director of the National Ford Department. “The technology in the all-new 2015 F-150 is something the auto industry has never seen before, and our UAW members are poised and excited to build the next generation of America’s favorite truck.”

“Ford’s announcement is more positive news for the citizens of Michigan and a further sign of the comeback of Michigan, manufacturing, and the auto industry,” said Michigan Gov. Rick Snyder.

Since the 2011 UAW-Ford contract negotiations, Ford has added jobs across its other U.S. manufacturing plants, for a new job creation total of more than 14,000, which exceeds its goal of creating 12,000 hourly jobs in the U.S. by 2015. More than 4,000 of these jobs were added in southeastern Michigan alone, including:

In designing the backbone of the F-150, Ford engineers improved the truck’s signature fully boxed ladder frame. It is all-new with more high-strength steel than ever – making it stronger and lighter. High-strength, military-grade, aluminum alloys – already used in aerospace, commercial transportation, energy, and many other rugged industries – are used throughout the F-150 body for the first time, improving dent and ding resistance and also saving up to 700 pounds of weight.

The 2015 F-150 is designed to be the most fuel efficient F-150 ever, thanks to the dramatic improvements in weight and advanced engine technology. Every model, every engine, and every customer benefits from this weight savings. This means the 2015 F-150 can tow up to 1,100 more pounds, haul up to 530 more pounds and will have better fuel economy ratings than the current F-150 lineup, projected to be in the range of at least 5 percent and as much as 20 percent higher than current models, depending on the model. EPA-estimated fuel economy ratings are not yet available and will likely be announced in November.

When it arrives in showrooms later this year, the all-new F-150 will have undergone the equivalent of more than 10 million miles of torture testing to ensure it meets or exceeds Built Ford Tough standards.

In addition to an all-new 2.7-liter EcoBoost ® engine offering, a complete lineup of powertrains lets customers tailor the truck ever to their needs. The 3.5-liter EcoBoost engine returns, an all-new normally aspirated 3.5-liter V6 debuts and there is an improved 5.0-liter V8.

The all-new F-150 will be manufactured at Dearborn Truck Plant in Dearborn, Michigan, and Kansas City Assembly Plant in Claycomo, Missouri.