While Harley's announcement may not sit well with its core riders, who relish the distinctive rumble of the V-twin engine's exhaust, it might provide the impetus needed for the electric market to take off. 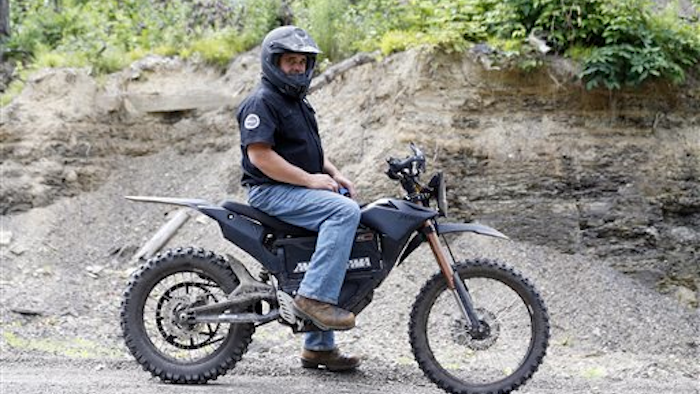 PRINCETOWN, N.Y. (AP) -- When Maggie McNally-Bradshaw and husband Curt hop on their electric motorcycles and twist the throttles, they get a rush like no other.

Or maybe a WHOOSH!

"There is that sense of being at the beginning of something new, and part of our future as far as ecology," said McNally-Bradshaw, chairwoman of the American Motorcyclist Association. "People think it's novel. Then they realize it's powerful stuff. The technology is improving by leaps and bounds. It's coming."

While startups like Zero, Brammo and Mission are producing state-of-the-art electric motorcycles on the West Coast, Harley-Davidson has decided to jump into the fray. The Milwaukee-based manufacturer announced its LiveWire this month and plans to offer demo rides to gauge interest nationwide before going into production.

"We don't see it at all replacing internal combustion," Harley President Matt Levatich said. "I mean, maybe in 100 or 50 years, I don't know. We'll be open to what people want."

Still, while Harley's announcement may not sit well with its core riders, who relish the distinctive rumble of the V-twin engine's exhaust, it might provide the impetus needed for the electric market to take off.

"We had our biggest single day of Internet traffic in the history of the company the day Harley made its announcement," said Scot Harden, vice president of global marketing for Zero Motorcycles, which began in a Santa Cruz, California, garage in 2006 and now is the top seller of full-size, high-powered electric bikes. "It just validates what we've been saying and how it's going to play out in the years ahead."

A recent study by Navigant Research suggests the industry is at the start of a trend. The research company anticipates sales of electric motorcycles worldwide will grow to 1.2 million this year.

No surprise that Yamaha, Honda and KTM also have electric bikes in the pipeline.

"It seems that electric motorcycles are going to be a pretty important mainstay," said Jerry Phibbs Jr., a longtime motorcycle dealer in Albany who sold all four of the Zero bikes on the showroom floor this year. "All of the industry standards say by 2018 it will consist of more than 50 percent of the market. I don't know if I believe that, but it's certainly going to be a major part of it."

Zero expects to sell 2,400 electric motorcycles this year, a fraction of the more than 260,000 conventional motorcycles sold last year alone by Harley. But what has happened to the technology since former NASA engineer Neal Saiki began tinkering in that Santa Cruz garage is impressive.

"When we started, we were hoping to get to the performance of the 125cc race bike," said Craig Bramscher, chairman of Oregon-based Brammo Inc. "Now, we went around Daytona (International Speedway) at 175 mph. We see the path. There's technology there where it starts to exceed the capabilities of the bike to hold the road. We can see that we can pass gasoline in terms of its capability."

Mission's high-end superbike represents the cream of the crop in performance and cost, with a price tag around $29,000. It looks like any gas-powered model, but that's where the similarities end. Cited by Time Magazine as one of the 25 best inventions of 2013, it zooms from zero to 60 in under 3 seconds, has a top speed in excess of 150 mph with a range of 140 miles on the highway and 230 in the city, and has a computer for a dashboard.

"We're as good or better than any gas bike, but we're still expensive," said Mission president Mark Seeger, whose goal is to produce a bike with a 600-mile range so charging time becomes a moot point. "Can we produce a vehicle that is better than anything that came before it and has the same price or cheaper? It's going to happen."

Electric motorcycles are well-balanced and easy to ride because most have direct drive (gears and clutches are optional). There are no tailpipe emissions, no clunking pistons, no crankshaft, no oil leaks, no vibration and virtually no maintenance save new tires and brakes. The average range is well over 100 miles in city driving. (Four years ago, it was about 25 miles.) They plug into regular household outlets for charging that costs under $2. And Zero says its batteries will last over 300,000 miles.

The global marketplace is a target as consumers outside the United States seek relief from high gasoline prices. Zero's SR model gets the equivalent of 462 miles per gallon around town.

"The total cost of ownership will be cheaper soon, very soon, and the upfront cost will be lower as well," Bramscher said. "People will ride them, and then they'll go, 'Oh, my gosh! This is so much fun!'"