More places to "refuel" would diminish worries of getting stranded with a dead battery, and widespread adoption of the cars would help the state meet ambitious air quality goals. Instead of Californians plugging in, however, progress has been plugged up: 110 of the 1,040 stations that NRG committed to installing by early December are ready. 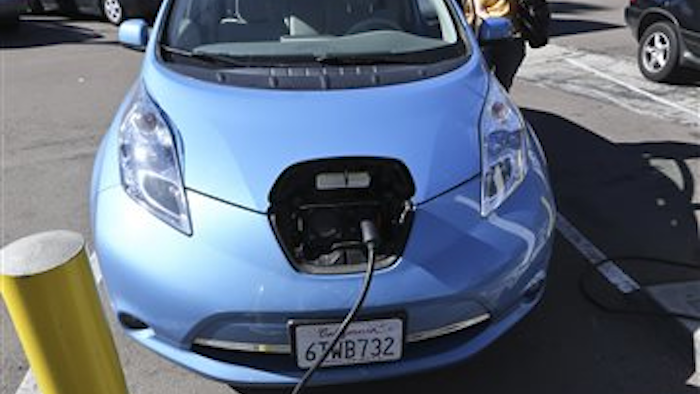 LOS ANGELES (AP) -- A New Jersey energy company required by an unusual legal settlement to build an extensive network of electric car chargers throughout California has delivered just 10 percent of what it promised in the first year.

By fortifying the state's still-spotty charging infrastructure, the settlement between NRG Energy Inc. and California energy regulators was sold as key to jump-starting enthusiasm for the non-polluting vehicles. More places to "refuel" would diminish worries of getting stranded with a dead battery, and widespread adoption of the cars would help the state meet ambitious air quality goals.

Instead of Californians plugging in, however, progress has been plugged up: 110 of the 1,040 stations that NRG committed to installing by early December are ready.

The subsidiary responsible for building the stations, NRG eVgo, blames a series of unanticipated problems, including a reluctance among owners of malls, offices and apartment buildings to provide space for the chargers — even when the company subsidizes their cost.

The count of new stations so far, released to The Associated Press, is likely to renew concern over the settlement and whether NRG eVgo will be able to comply over its four year term. NRG eVgo said it expects a burst of activity in 2014 will bring it back on schedule.

The deal settled the state's claims that plants co-owned by NRG overcharged for electricity during California's power crisis a decade ago. By the end of 2016, the company is to spend $90.5 million to install at least 10,200 new charging stations statewide. Of that total, 200 will be publicly available "fast-charging" spots akin to gas stations; the other 10,000 will be slower chargers at individual parking spaces.

From the outset, skeptics suggested that the settlement doesn't adequately compensate Californians or penalize the company for the alleged price gouging. For one, NRG keeps profits from the chargers.

"How is that a penalty? You're giving them more locations. And they're earning revenue from them," said John Gartner, research director of smart transportation at Navigant Research who has followed the settlement. "Really, really weird."

While California's many environmentally inclined consumers may seem eager for electric cars — and, led by Gov. Jerry Brown, the state is relying on 1.5 million zero-emission vehicles by 2025 to reduce air pollution — the lack of charging stations remains a barrier.

The settlement contains language that allows annual targets to be missed as long as the company is making "reasonable efforts." Staff at the California Public Utilities Commission, which approved the deal, said they believe NRG eVgo is complying.

"You need to build in some elasticity in the timeframe because you don't know what's going to happen in an emerging market," said CPUC attorney Chris Clay. "We're optimistic that these guys will pull it off."

If NRG eVgo doesn't, the CPUC would receive the unspent funds, or $50,000 per station, whichever is greater, agency staff said.

In a series of interviews, NRG eVgo's vice president of business development in California, Terry O'Day, acknowledged difficulties in the rollout but insisted "great progress" was being made.

Property owners have been surprisingly skeptical, he said, and local planning regulations can get in the way — despite the enthusiasm from leaders at the state level. Identifying and installing the first locations takes time, he said, but "site development moves more quickly" after that.

"I'm absolutely confident this is not only realistic but absolutely transformational" for air quality and electric vehicle adoption in California, O'Day said.

Soon after federal regulators approved the settlement last November, O'Day told a former president of the Electric Vehicle Association of Southern California that 15 fast-charging "Freedom Stations" should be in the ground by the end of March.

Currently, seven are operational. Under the settlement, NRG eVgo was supposed to have installed 40 such stations by Dec. 5, leading to a total of 200 by the end of 2016. Available to the public, for $10 they allow cars to go about 80 miles after 20 minutes of charging. The open stations are at five malls in the San Diego, Los Angeles and San Francisco Bay areas, and at two Whole Foods markets.

O'Day said his company has submitted permit requests or started to construct 31 more fast-charging stations and expects to pick up the pace — and expand into the San Joaquin Valley — in 2014. He said the company has 102 more potential sites targeted, though not all of those will work out.

The settlement also envisioned that by Dec. 5, there would be 1,000 "Level 2" chargers that supply enough electricity for 12 to 24 road miles for each hour of charging. So far, 103 are operational, including 40 at a high-end apartment complex in San Diego. By the end of 2016, 10,000 are supposed to be completed.

These chargers are available to NRG eVgo subscribers who park at apartment complexes or office buildings where the company has installed electrical infrastructure to support them. To stimulate demand, the company reduced monthly rates from $79 to about $35, plus electricity.

Returning late one night recently from San Diego, he ran into trouble when one fast charger was dark and a freeway closure sent him miles off his normal route. His battery ran low and at 3 a.m. he found himself waiting an hour and a half to get enough juice from a Level 2 charger to get home. A fast charger would have had him on the road in 10 minutes.

"I gotta say, we need those chargers in the ground as fast as possible," Scott said. "I'm disappointed things haven't happened quicker."

These Tesla enthusiasts don’t want to wait until 2021.
Sep 9th, 2020
Follow Us
Most Recent