The two-billion-dollar manufacturing complex in Aguascalientes, central Mexico, is capable of assembling 175,000 cars annually. It will initially produce Sentra compact sedans, which are to be shipped to over 20 markets globally.

AGUASCALIENTES, Mexico (Kyodo) -- Nissan Motor Co. started production at its third vehicle manufacturing plant in Mexico on Tuesday, raising the annual output capacity to over 850,000 in the Central American country.

The two-billion-dollar manufacturing complex in Aguascalientes, central Mexico, is capable of assembling 175,000 cars annually. It will initially produce Sentra compact sedans, which are to be shipped to over 20 markets globally.

Nissan expects its Mexican subsidiary to play a key role in the company's plan to achieve an 8 percent global market share by 2016.

The new plant "is aimed at satisfying the high demand for Nissan vehicles produced in Mexico throughout the Americas and beyond," Nissan Chief Executive Officer Carlos Ghosn said at the opening ceremony attended by Mexican President Enrique Pena Nieto.

Nissan's production capacity throughout the Americas will reach two million units annually once another plant in Brazil starts operation in the first half of 2014.

Japanese automakers are expanding production in Mexico, with Honda Motor Co. and Mazda Motor Corp. starting operation of new plants next spring and in the January-March quarter of 2014, respectively. 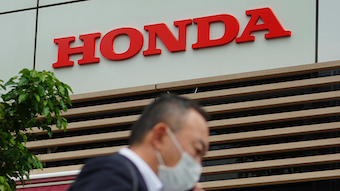 But it slightly lowered its vehicle sales forecast.
Aug 4th, 2021

But the automaker says the rest of the year could be "volatile."
Aug 3rd, 2021

The financial milestone extends a two-year run of prosperity.
Jul 27th, 2021
Follow Us
Most Recent