The recall affects Cruzes made in Lordstown, Ohio, from the 2011 and 2012 model years that are equipped with 1.4-liter turbocharged gasoline engines and 6T-40 six-speed automatic transmissions. It's the eighth recall of the car since it was introduced in September of 2010, according to records compiled by the NHTSA. 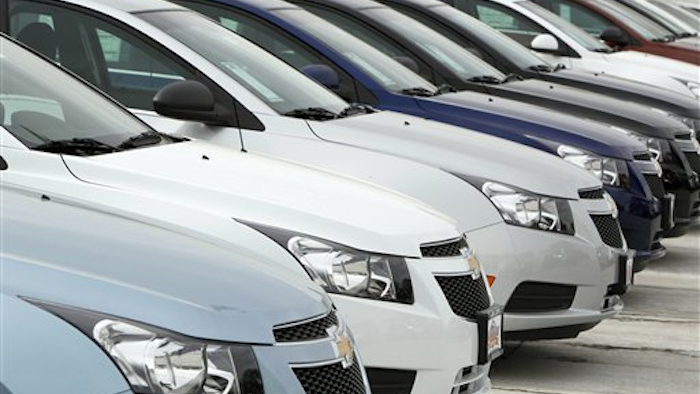 The recall affects Cruzes made in Lordstown, Ohio, from the 2011 and 2012 model years that are equipped with 1.4-liter turbocharged gasoline engines and 6T-40 six-speed automatic transmissions, the company said Friday.

It's the eighth recall of the car since it was introduced in September of 2010, according to records compiled by the National Highway Traffic Safety Administration. Auto safety advocates say that's an unusually high number of recalls.

GM said that in the most recent recall, the power brake boosters can fail, and in rare cases, drivers may have to put extra pressure on the pedal to stop the cars.

The company said that Cruze brake problems have caused 27 low-speed crashes but no injuries.

Dealers will replace a switch in the power brake vacuum pipe assembly for free.

The Cruze has been recalled previously for oil leaks that can cause fires, fuel tanks coming loose, transmission and steering problems and side air bag malfunctions.

Through July, the Cruze ranked No. 3 in U.S. compact car sales at 159,136, trailing only the Honda Civic and Toyota Corolla. Since 2010, GM has sold more than 650,000 Cruzes in the U.S., according to Autodata Corp. The company has sold over 2 million worldwide.

Joan Claybrook, a safety advocate and former NHTSA administrator under President Jimmy Carter, said eight recalls in three years is a large number. "It seems most unfortunate for the company, and for the car and for the consumer," she said.

The 2013 Cruze has not been recalled, an indication that someone at the top of the company has taken action to make sure the problems were worked out, Claybrook said.

GM spokesman Alan Adler said safety is a priority for the company. "The recalls are indicative of our dedication to making sure that problems that are spotted are fixed and customers can have complete confidence and peace of mind in driving," he said.