The jumbo jet fleet's retirement was accelerated by the coronavirus pandemic. 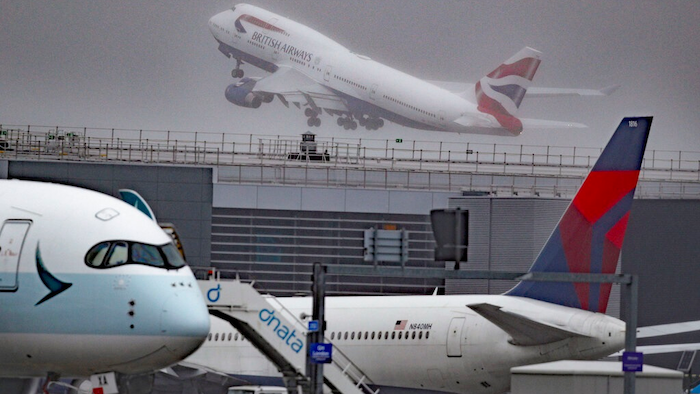 Aircraft G-CIVY, one of the last two British Airways Boeing 747-400 aircraft takes off for its last flight departure from London's Heathrow Airport, Thursday, Oct. 8, 2020. The retirement of the fleet was brought forward as a result of the impact the Covid-19 pandemic had on the airline and the aviation sector.
Steve Parsons/PA via AP

LONDON (AP) — British Airways' last two Boeing 747 planes at the airline's historic base of London's Heathrow Airport made their final flight Thursday, the fleet's retirement having been brought forward by the coronavirus pandemic.

To mark the occasion, the two planes with their distinctive humps at the top, took to the skies one after the other for their journeys into retirement. No passengers were onboard.

One went to the Kemble airfield in western England, and the other headed to the St. Athan airfield in south Wales. Combined, they had flown 104 million miles in their 47 years, carrying millions of customers for work and play.

“Today was an emotional milestone in the retirement of our 747 fleet as it was our last chance to see the Queen of the Skies depart from our home at Heathrow airport,” said Alex Cruz, BA’s chairman and CEO. "I know I speak for our customers and the many thousands of colleagues who have spent much of their careers alongside them when I say we will miss seeing them grace our skies.”

BA announced in July that its 747s had flown their final commercial flights as a result of the pandemic, which has severely curtailed international travel and is expected to do so for years to come. Originally, BA, which was the world’s biggest operator of the 747-400 model, was planning to retire the fleet in 2024.

BA’s predecessor, BOAC, operated its first 747 London to New York service in April 1971 and the plane — affectionately referred to as the “jumbo jet” — became a symbol of the new age of mass travel to all corners of the planet. It remained the largest commercial aircraft in the world until the Airbus A380 first took to the skies in 2007.

At one point, BA operated 57 jumbos but its days have been numbered, in light of new, modern, fuel-efficient aircraft such as Airbus’ A350 and Boeing’s 787.

More than 1,500 jumbos were produced by Boeing, and it has historically been a commercial success for the manufacturer and the airlines.

BA senior first officer Mark Vanhoenacker said it had been his “childhood dream” to fly the 747.

“It was a very large airplane, of course, but it didn’t feel like it,” he said.

“It’s a beautiful design, a classic like Concorde, and I often think the upper deck made the 747 look more birdlike.”