Data in the Ethiopian update could renew questions about the pilots’ actions – in particular, their decision to turn MCAS back on. 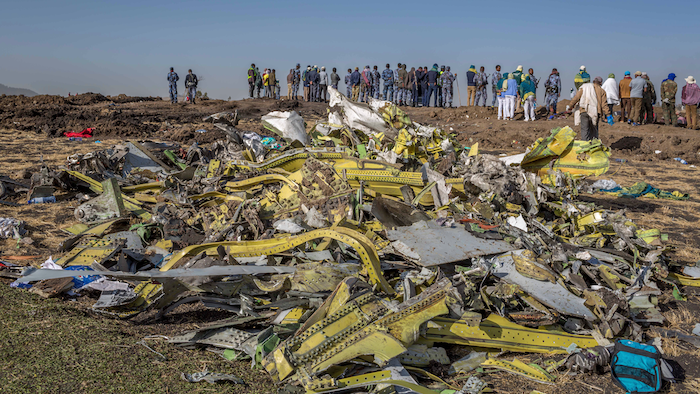 In this March 11, 2019, file photo, wreckage is piled at the crash scene of Ethiopian Airlines flight ET302 near Bishoftu, Ethiopia.
Associated Press

Ethiopian investigators are mostly blaming Boeing for last year’s crash of a Ethiopian Airlines jet shortly after takeoff, saying in an interim report Monday that there were design failures in the jet and inadequate training for pilots.

The update from Ethiopian investigators — timed to beat the anniversary of the crash on March 10, 2019 — pointed to the role played by a new flight-control system that Boeing installed on the 737 Max and which repeatedly pushed the nose of the plane down.

The system, called MCAS, overwhelmed the pilots’ attempts to control the plane. When it triggered for the fourth and final time, the pilots fought back by pulling on their control columns with up to 180 pounds of force, but the nose of the plane sank even more and the jet flew even faster.

Shortly before impact, the plane was streaking downward at 575 mph — at a rate of more than 5,000 feet per minute — with its nose tilted down at a 40-degree angle, according to the interim report from Ethiopia's Aircraft Accident Investigation Bureau.

All 157 people on board were killed when flight 302 crashed into a field six minutes after takeoff from Addis Ababa. Every Max jet worldwide was grounded within days of the crash — the second involving a Boeing Max in less than five months.

The investigators issued several recommendations to Boeing and placed little blame on the airline or its pilots. In that regard, the Ethiopian update differed from a final report that Indonesian investigators issued after a 737 Max operated by Lion Air crashed in October 2018 and killed all 189 people on board.

Data in the Ethiopian update, however, could renew questions about the pilots’ actions – in particular, their decision to turn MCAS back on after first disabling it when the plane’s nose pitched down. One aeronautics expert said restoring power to MCAS doomed the flight.

Monday’s interim report by Ethiopia’s transport ministry was not remarkably different from a preliminary report the government issued last April. Boeing and the U.S. Federal Aviation Administration said they were reviewing the update, but both already seemed to be looking ahead to a final report that the Ethiopians are expected to issue later this year.

“We believe it’s important to have the full final report to evaluate it against other independent reports so that we might fully understand all of the factors -- both mechanical and human -- that played a role in this tragic loss of life,” the FAA said in a statement from spokesman Lynn Lunsford.

Boeing shares plummeted 13% in afternoon trading. The stock sell-off, however, may have been more closely related to the worsening coronavirus outbreak, which is undercutting demand for air travel, and a report that the Max could be grounded longer than Boeing expects while the company fixes a wiring problem with the planes.

Wiring bundles are too close together, raising the risk of short-circuiting and fire in extreme situations. Boeing has been analyzing the issue for several weeks. The Wall Street Journal reported that FAA managers and engineers have recommended requiring Boeing to move the wiring on nearly 800 Max jets, which could further delay Boeing’s schedule for returning the planes to flight later this year.

The FAA said Monday it was continuing to discuss the matter with Boeing, and that the plane will only be cleared to fly when the agency is satisfied that all safety-related issues have been fixed.

Monday’s interim report by the Ethiopian investigators added to pressure on Boeing. It came three days after a congressional report said Boeing's development of the Max was marred by design failures and a “culture of concealment” to hide information from regulators and airlines. Democrats on the House Transportation Committee also slammed the FAA for poor oversight of Boeing. Committee leaders are vowing to propose changes in how FAA oversees aircraft manufacturers.

The Ethiopian board made six recommendations, all aimed at Boeing or the FAA, which certified the plane in 2017. Boeing is addressing some of the recommendations by changing MCAS to make it less powerful. Boeing is also endorsing the use of flight simulators to train pilots on how MCAS makes flying the Max different from previous models of the 737.

There were no recommendations for Ethiopian Airlines, which has defended the actions of its pilots. The update, however, pointed out again that pilots on flight 302 restored power to the MCAS flight-control system after initially turning it off. When they did that, the pilots couldn’t counter the downward pitch caused by the position of the stabilizer, a horizontal fin on the tail that pushes the nose up or down, because they were flying so fast, said John Hansman, an aeronautics professor at MIT.

It's unclear why, but the pilots had left the throttles fully open after takeoff. Hansman believes the pilots might have been too busy and distracted to notice.

“They were saturated. They were dealing with so much stuff -- all those warnings,” he said. “It is hard to diagnose exactly what is happening and what the causality is while you are trying to keep the airplane under control.”

In a statement, Boeing said it continued to provide technical help to the investigators as they finish their work.

“We look forward to reviewing the full details and formal recommendations that will be included in the final report from the Ethiopian Accident Investigation Bureau,” said the statement by spokesman Gordon Johndroe.