Corruption Settlement Could Cost Airbus $4B

While costly, the settlement would allow Airbus executives to avoid trial. 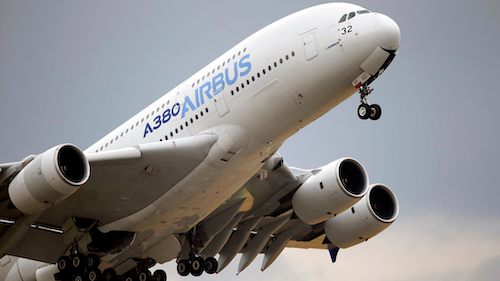 In this June 18, 2015, file photo, an Airbus A380 takes off for its demonstration flight at the Paris Air Show in Le Bourget airport, north of Paris. Airbus says it has reached potential settlement agreements with financial investigators in the U.S., Britain and France. British and French authorities are investigating alleged fraud and bribery related to Airbus' use of outside consultants to sell planes.
AP Photo/Francois Mori, File

PARIS (AP) — Courts in Britain, France and the U.S. are considering Friday whether to accept a settlement that could cost Airbus up to $4 billion and end years of corruption investigations.

If approved, the deal would be among the biggest-ever settlements in both France and Britain in a company corruption case.

While costly, the settlement would allow Airbus executives to avoid trial, and allow the company to turn the page on a period that damaged its reputation and led to management and policy changes.

The European plane maker said earlier this week it had reached preliminary settlement deals with authorities in all three countries investigating alleged fraud and bribery. Airbus put aside 3.6 billion euros ($4 billion) to cover the costs.

The deals need to be approved by courts in all three countries, which were expected Friday.

French prosecutors said Friday that France would get 2.1 billion euros out of that sum. Britain would get the equivalent of 983 million euros and the U.S. 530 million euros. They said investigators had gathered 30 million documents and conducted searches or interviews in 20 countries, including of current and former executives and employees.

The French financial prosecutor's office and British Serious Fraud Office started investigating in 2016, and the U.S. Department of Justice joined in 2018.

An industry trade group warned that airlines worldwide could lose up to $113 billion in revenue from the virus.
David Koenig
Mar 12th, 2020

Coworkers were asked to remain home and self-quarantine.
Mar 11th, 2020