If Canada declines to purchase the luxurious plane, Mexico will raffle it off. 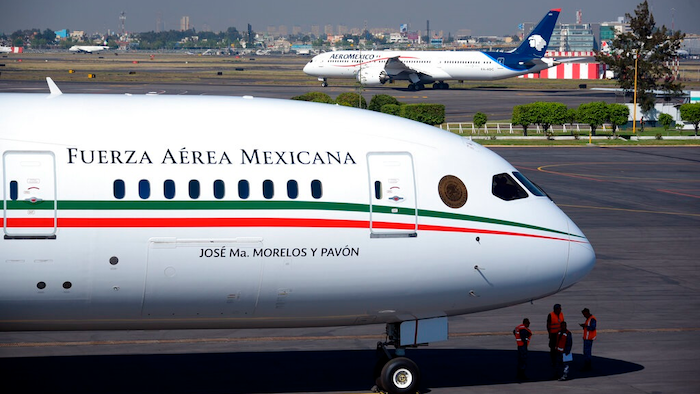 MEXICO CITY (AP) — Mexico is trying to sell its luxurious presidential jet to Canada, but will raffle the plane off if the Canadians don't want it, President Andrés Manuel López Obrador said Tuesday.

The offer marks the latest chapter in a desperate effort to unload the large and lavish Boeing 787 Dreamliner that López Obrador views as wasteful.

He said Tuesday that the plane bought for more than $200 million by his predecessor would be a step up for Canada's prime minister.

“We learned that Canadian Prime Minister Trudeau's airplane had problems, and we offered it to them, but there hasn't been an agreement yet,” López Obrador said. “The truth is that it is bigger than the Canadian prime minister's, and better.”

Officials have said Mexico would accept $130 million for the plane.

López Obrador presented a prototype of the lottery-style ticket that would be issued for the jet if the raffle idea goes ahead. He said he hoped business owners would buy huge blocks of the 500-peso ($25) tickets. The government hopes to sell 6 million tickets and use the proceeds to buy medical equipment.

More than a white elephant, the plane now seems to be an albatross. Some Mexicans said they wouldn't want to win it.

“I would not buy it,” Mexico City resident Lidia Flores said of the possible raffle tickets, saying she would have no idea of what to do with the hulking airliner is she won.

Even López Obrador expresses doubts about the idea, saying he worries that greed or envy could wreck the life of anyone who won the jet in a raffle.

“I don't want to bear the guilt, because I would be responsible,” he said Tuesday. “It worries me. It''s the only thing holding me back, how to prevent something bad befalling the person who wins.”

Others see the raffle proposal as a distraction from Mexico's real problems, like crime, violence and economic stagnation.

“This is a smoke screen,” said Eliseo Ochoa, a lawyer in Mexico City. “This is just a joke at the expense of the public.”

The austerity-minded López Obrador takes commercial flights and has refused to step foot on the presidential jet, which was purchased by the previous president, Enrique Peña Nieto.

López Obrador says the jet is too luxurious for a country where half the people are poor.

The plane failed to find a buyer after a year on sale at a U.S. airstrip, where it piled up about $1.5 million in maintenance costs.

The jet is expensive to run and is configured to carry only 80 people, with a full presidential suite with a bedroom and private bath. Experts say it would be too expensive to reconfigure back into a commercial airliner that normally carries as many as 300 passengers.

Previously, López Obrador had suggested bartering the plane in exchange for U.S. medical equipment or selling it in shares to a group of businessmen for executive incentive programs. He has also offered to rent it out by the hour, in hopes of paying off the remainder of outstanding loans on the plane.

Mexican Twitter users are posting ideas about where they would park the huge jet if they won it (clue: in the yard, because it won't fit in the garage). They fantasize about the kind of parties they would throw aboard it (beer-filled trips to the Super Bowl appears popular) and what colors they would paint it (one user suggested bright purple).

But the most popular idea for using the jet appears to be turning it into a stationary restaurant or taco stand.

The company is inspecting part of the tail after finding that pieces were clamped together too tightly.
Sep 9th, 2020
Follow Us
Most Recent