It's a reversal of the company's long-held position that computer-based training alone was adequate. 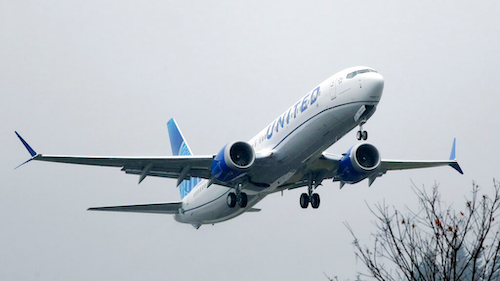 In this Dec. 11, 2019, file photo, an United Airlines Boeing 737 Max airplane takes off in the rain at Renton Municipal Airport in Renton, Wash. Boeing said Tuesday, Jan, 7, 2020, it is recommending that pilots receive training in a flight simulator before the grounded 737 Max returns to flying, a reversal of the company's long-held position that computer-based training alone was adequate. The 737 Max has been grounded worldwide since last March after two crashes killed 346 people.
AP Photo/Ted S. Warren, File

Boeing said Tuesday it is recommending that pilots receive training in a flight simulator before the grounded 737 Max returns to flying, a reversal of the company's long-held position that computer-based training alone was adequate.

The recommendation is based on changes to the plane, results from tests involving a small number of pilots, and a commitment to the safe return of the Max, Boeing said.

The final decision on the nature of training will be up to the Federal Aviation Administration and regulators in other countries. The FAA said it will consider Boeing's recommendation but also rely on upcoming further tests using pilots from U.S. and foreign airlines.

"The FAA is following a thorough process, not a set timeline, to ensure that any design modifications to the 737 Max are integrated with appropriate training and procedures," Lunsford said.

The 737 Max has been grounded worldwide since last March after two crashes killed 346 people. Boeing is making changes to flight-control software and other systems in a bid to get the plane back in the air.

Boeing long held that pilots who can fly older 737s only needed a computer course — roughly an hour-long course on a tablet — to fly the Max. That helped airlines avoid timely and costly training in simulators.

Boeing even offered to pay Southwest Airlines a rebate of $1 million per plane if pilots needed simulator training before flying the Max.

Last year, an FAA technical advisory board sided with Boeing and recommended that only computer-based training was needed. However, families of victims of the two crashes lobbied for simulator training, arguing that pilots need to experience how the Max differs from previous versions of the 737.

"Of course this should be required," Nadia Milleron, a Massachusetts woman whose daughter, Samya Stumo, died in the March 2019 Max crash in Ethiopia, said after Boeing's announcement. "Passengers should not have to push for basic safety standards."

Similarly, the chairman of a congressional panel investigating Boeing said the company's endorsement of simulator training was welcome but overdue.

“It’s remarkable that it took two deadly crashes, numerous investigations and untold public pressure before Boeing arrived at this decision," said Peter DeFazio, D-Ore., chairman of the House Transportation Committee. He said Boeing "put production and profits ahead of the public’s safety" by assuring airlines that its 737 pilots could fly the Max without going through simulator training.

Boeing's interim CEO, Greg Smith, said in a statement that Boeing decided to recommend simulator training because of the importance to Boeing of gaining public and airline confidence in the Max.

U.S. pilot unions stood by Boeing and vouched for the Max's safety after the first crash, in Indonesia in October 2018. The American Airlines union said last April that pilots should practice certain emergencies in a simulator — but only as part of regular training and not necessarily before the Max returned.

Dennis Tajer, a 737 pilot and spokesman for the union, said Tuesday that as more revelations emerged about the design of key systems, the union grew skeptical. He said Boeing's endorsement of simulator training now “sounds like a step in the positive direction.”

The U.S. airlines that own Max jets — Southwest, American and United — issued muted statements, saying they would wait for a final decision by FAA.

It is not clear whether a requirement for simulator training would further delay the return of the Max, which is costing Boeing billions and forcing airlines to cancel thousands of flights. About 800 Max jets have been built, and they were expected to become a bigger part of the fleets at many airlines.

There are only 34 MAX flight simulators worldwide — Boeing owns eight of them, and more are being made. But U.S. airlines alone have thousands of 737 pilots -- Southwest has nearly 10,000, and American and United have more than 4,000 each.

The FAA could decide that pilots can practice Max-related emergency procedures on simulators meant for older 737s called NG or next generation. Or airlines could split their Max and NG fleets and train just a small fraction of 737 pilots for the Max. However, airlines want to avoid that extra complexity, according to industry officials.