NASA has approved an update to Juno’s science operations until July 2021. 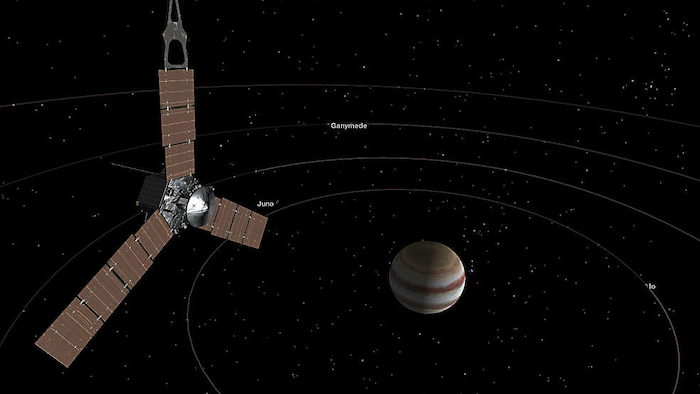 NASA has approved an update to Juno’s science operations until July 2021. This provides for an additional 41 months in orbit around Jupiter and will enable Juno to achieve its primary science objectives.  Juno is in 53-day orbits rather than 14-day orbits as initially planned because of a concern about valves on the spacecraft’s fuel system. This longer orbit means that it will take more time to collect the needed science data.

An independent panel of experts confirmed in April that Juno is on track to achieve its science objectives and is already returning spectacular results.  The Juno spacecraft and all instruments are healthy and operating nominally.

NASA has now funded Juno through FY 2022. The end of prime operations is now expected in July 2021, with data analysis and mission close-out activities continuing into 2022.

“With these funds, not only can the Juno team continue to answer long-standing questions about Jupiter that first fueled this exciting mission, but they’ll also investigate new scientific puzzles motivated by their discoveries thus far,” said Thomas Zurbuchen, associate administrator for NASA’s Science Mission Directorate in Washington. “With every additional orbit, both scientists and citizen scientists will help unveil new surprises about this distant world."

“This is great news for planetary exploration as well as for the Juno team,” said Scott Bolton, principal investigator of Juno, from the Southwest Research Institute in San Antonio. "These updated plans for Juno will allow it to complete its primary science goals. As a bonus, the larger orbits allow us to further explore the far reaches of the Jovian magnetosphere -- the region of space dominated by Jupiter's magnetic field -- including the far magnetotail, the southern magnetosphere, and the magnetospheric boundary region called the magnetopause. We have also found Jupiter’s radiation environment in this orbit to be less extreme than expected, which has been beneficial to not only our spacecraft, but our instruments and the continued quality of science data collected.”