New NASA Chief Vows US Will Always Have Astronauts in Orbit

Major changes could be ahead for the International Space Station but there will always be an American astronaut in orbit, NASA's new boss said Wednesday. 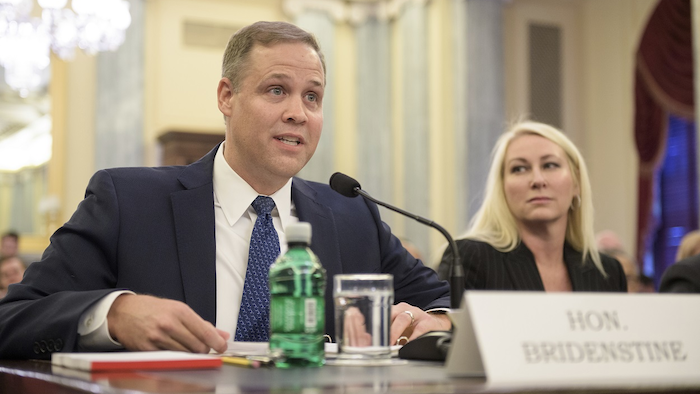 In this Wednesday, Nov. 1, 2017 photo provided by NASA, Rep. James Bridenstine, R-Okla., nominee for administrator of NASA, testifies at his nomination hearing before the Senate Committee on Commerce, Science, and Transportation in the Russell Senate Office Building in Washington. Image credit: Joel Kowsky via AP

Major changes could be ahead for the International Space Station but there will always be an American astronaut in orbit, NASA's new boss said Wednesday.

The space agency is already talking with private companies about potentially taking over the space lab after 2025, but no decision will made without the other 21 countries that are partners in the project, NASA Administrator James Bridenstine said in his first briefing with reporters.

President Donald Trump's recent budget requests have put discussions about the station's future "on steroids," he said. Under Trump's 2019 proposed budget, U.S. funding for the space station would end by 2025. The U.S. has spent more than $75 billion on the space station.

Options include splitting the station into different segments or reducing its size by breaking it up and discarding one part.

But no matter what happens, there won't be any gap when Americans aren't in space, Bridenstine vowed. It won't be like after the Apollo moon program closed or even the retirement of the space shuttle fleet, which has forced NASA to pay Russia to ferry astronauts to the station.

"There are kids graduating from high school this month, that their entire lives, we've had an astronaut in space," Bridenstine said. "And we want that to live on in perpetuity forever. No gaps."

Companies are interested in running the station and "there's a range of options" that are just now being examined, he said.

The first station piece was launched in 1998. The complex was essentially completed with the end of the shuttle program in 2011. It is about the size of a six-bedroom house, complete with two bathrooms, a gym and a 360-degree bay window. It usually has a crew of six.

In wide-ranging remarks, the former Oklahoma Republican congressman said he generally supports NASA's Earth science missions, including missions that monitor heat-trapping carbon dioxide. He said at least three climate science satellites that the Trump administration had tried to cancel earlier in budget proposals "could all end up in very good shape" and that he supported them in Congress, crossing party lines.

"We're going forth with missions that are going to do carbon monitoring," he said, ticking off a couple of projects. "We're committed to that."

When told that a Pew Research poll out Wednesday said that 63 percent of Americans said NASA's top priority should be monitoring key parts of Earth's climate, Bridenstine said "good" and reiterated his acceptance of human-caused climate change as a threat to national security and the globe.

Bridenstine also said he hopes NASA will put some kind of small robotic landers on the moon next year, followed at some later date by humans. Astronauts should use the moon as a "proving ground" for future missions to Mars, especially checking out potential health issues for living far away from Earth for a long time. He said he worried about balance, vision, bone loss and heart issues that have been reported with space station astronauts.

"We do not want to go to Mars and have our astronauts to be marshmallows on the surface of Mars," Bridenstine said. "The moon is our best opportunity to be successful when we go to Mars."