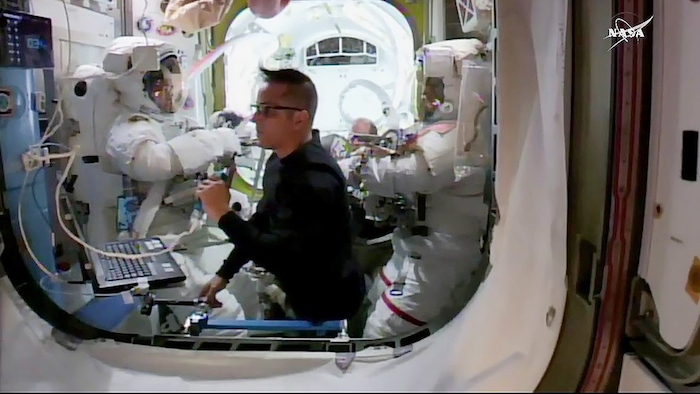 From left, astronauts Norishige Kanai, Joe Acaba, and Mark Vande on the International Space Station. Kanai and Vande recovered aging equipment from the Canadarm gripper on the morning of Feb. 16.

Spacewalking astronauts stepped out Friday to wrap up months of repair work on the International Space Station's big robot arm.

The 58-foot robot arm had both of its aging mechanical hands replaced on spacewalks conducted in October and January. Friday's work involved bringing one of those old hands inside so it can be returned to Earth for a tuneup and then flown back up, and moving the other gripper to a long-term storage location outside.

This last spacewalk in the series should have been completed by now, but was postponed because of complications with the robotic hand that was installed last month. Further delays were caused by this week's late arrival of a Russian supply ship.

It was the first spacewalk for Kanai, a surgeon and former diving medical officer who arrived at the space station in December. For Vande Hei, it was spacewalk No. 4. He returns to Earth at the end of the month.

Four other men currently live at the space station.