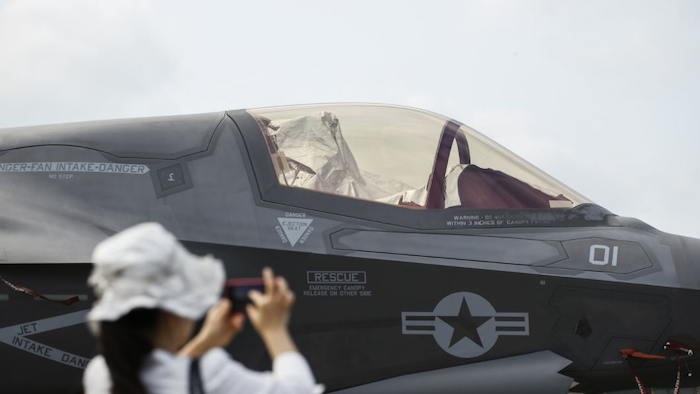 Ambassador Tina Kaidanow was part of a large U.S. delegation to the Singapore Airshow, the largest in the region, and urging Southeast Asian governments to purchase U.S.-made arms like the F-35 fighter jet.

Two F-35B fighter jets, belonging to the U.S. Marine Corps and made by Lockheed Martin, made their debut Tuesday at the air show. The jets can take off from a short runway and land vertically.

"It's been great, really great. A lot of interest in the region and in doing business here," Kaidanow told The Associated Press.

"We've seen a number of companies, small and large, and I want to encourage them both," she said.

Apart from supporting American jobs, the U.S. intends to help its regional partners beef up their security, she said.

The Trump administration in December outlined a new security strategy that emphasizes countering China's rise and reinforcing the U.S. presence in the Indo-Pacific region, where Beijing and Washington accused each other of stoking a dangerous military buildup.

More than 170 American companies were exhibiting at the Singapore show, using close to a third of the exhibition space according to a release from the U.S. Embassy. The show features over a 1,000 participating companies from 48 countries.

Among U.S weaponry on display were F-16C fighter jets, the U.S. Navy's P-8 Poseidon maritime patrol aircraft and an F/A-18 Super Hornet, a fighter aircraft made by Boeing.

Steve Over, who leads the international sales team at Lockheed for F-35s, said the U.S., Israel, Japan and South Korea militaries have invested $60 billion in the fifth-generation jet, which has an advanced sensor suite and the ability to sneak up on enemies without being detected.

"He has the skin of stealth so no one can see him, and yet he sees everything that is in the battle space. We network these airplanes together so they communicate with each other at very high bandwidth, much like high bandwidth internet in your home," Over explained.

The Singapore show's commercial dealings period ends Friday. Then, it will open to the public.

Analysts said that large aircraft orders are unlikely, given the current backlogs of leading manufacturers.

Airbus has a backlog of over 2,000 planes in the Asia-Pacific region alone. Chicago-based Boeing Co. has a total backlog of 5,864 planes.

Washington has been wooing countries like Vietnam, a former foe, with arms sales and transfers at a time when China has reinforced its territorial claims in the South China Sea with extensive construction projects on man-made islands.