Airbus To Sell 430 Planes To Phoenix-Based Indigo For $49.5B 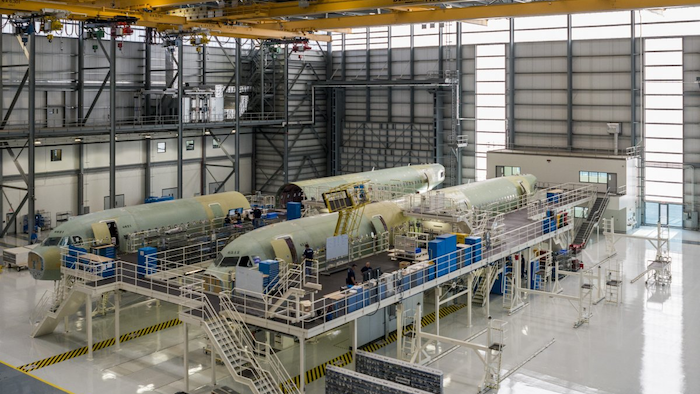 Airbus signed a $49.5 billion deal on Wednesday to sell 430 airplanes to the Phoenix-based private equity firm that owns Frontier Airlines, striking the European aerospace company's biggest deal ever at the Dubai Air Show.

Meanwhile, Boeing reached an agreement with low-cost carrier FlyDubai to sell 225 Boeing 737 MAX 10 aircraft — a deal valued at $27 billion. The developments came ahead of the biennial air show closing on Thursday.

"It's ended up going out on a high," airline analyst John Strickland of JLS Consulting said. "It shows once again the importance of this part of the world to the big airplane manufacturers."

The Airbus deal with Indigo Partners will see 273 A320neos and 157 A321neos split up among Denver-based Frontier, JetSMART of Chile, Volaris of Mexico and Wizz Air of Hungary, all ultra-low-cost airlines associated with Indigo.

The A320neo and the A321neo are twin-engine, single-aisle planes popular among airlines because of their reduced fuel consumption.

The surprise announcement came after Airbus on Sunday suffered the embarrassment of believing it had struck a major deal with the state-owned carrier Emirates to sell its A380 double-decker jumbo jet, only to see Boeing sit on the podium with the airline and sign a $15.1 billion deal.

"Just to clarify: This is not an A380 press conference," joked John Leahy, Airbus' sales chief, as the start of the announcement.

A320neos list for $108.4 million apiece and A321neos at $127 million. Airlines and manufacturers negotiate lower prices for big deals like these, something Indigo's managing partner Bill Franke was quick to stress afterward speaking to journalists.

Asked if he won this round, Franke said: "That'll be a good question."

Airbus' previous biggest-ever sale came in August 2015, when it sold 250 A320neos to Indian budget airline IndiGo, a deal estimated to be worth $26 billion at list prices. IndiGo and Indigo Partners are separate firms with separate management.

Shares in Airbus rose on the news, trading 2.7 percent higher at 85.75 euros in Paris in an otherwise lower market.

Franke is a pioneer of the cheap tickets and high fees airline business that has spread overseas and is growing in the United States. Such carriers offer low base fares but adds fees to stow a carry-on bag, get an assigned seat and other extras. That's led to soaring customer complaints against Frontier.

President Donald Trump also came up in Franke's conversation with journalists on Thursday, as Franke said the American leader would be happy to know the A321neos purchased by Indigo would undergo final assembly in the Airbus plant in Mobile, Alabama.

Shortly after, FlyDubai and Chicago-based Boeing Co. announced their $27 billion deal. FlyDubai said the planes would bring the low-cost carriers total fleet on order up to 320. FlyDubai has begun to code-share flights with Emirates; both airlines are owned by Dubai's government.

Boeing 737 MAX 10s, a twin-engine, single aisle plane capable of carry 230 passengers, have a list price of $124.7 million. They'll complement FlyDubai's fleet of Boeing 737s and keeps them a Boeing-only shop, something Airbus no doubt had hoped to change.

Until Wednesday, the only major deal announced at the Dubai Air Show came on Sunday, when long-haul carrier Emirates purchased 40 Boeing 787-10 Dreamliners in a $15.1 billion deal.

That deal also saw Emirates CEO and Chairman Sheikh Ahmed bin Saeed Al Maktoum bring up the 787-10 buy's ability to create jobs. Trump himself promoted that during a February visit to the South Carolina plant that builds the carbon-fiber, 330-seat plane.

Airbus, which is based in Toulouse, France, has pinned hopes of continuing production of its A380 double-decker jumbo jet on Emirates, the world's largest operator of the aircraft. Reports circulated before the air show that a major A380 sale would be coming.

Airbus employees even filled a news conference on Sunday, expecting the A380 sale, instead to find state-owned Emirates making the deal with Boeing in front of Dubai's ruler, Sheikh Mohammed bin Rashid Al Maktoum.

Strickland said that while the massive Airbus sale Wednesday likely took months to negotiate, it still helped Airbus save face at the air show.

"It would have been great relief," the analyst said.

Emirates now relies solely on the Airbus 380 and the Boeing 777 for its flights, making it the largest operator of both. It has 165 Boeing 777s in its fleet today and took possession of its 100th A380 earlier this month.

The Emirates' snub even came up at the news conference Wednesday, when a reporter asked Airbus if another deal could be coming.

"I think you've got to walk over to the chalet with Emirates on the door and ask them," Airbus' Leahy said.