Boeing and Airbus offered upbeat forecasts for the aircraft market over the next 20 years to tamp down worries that a boom in plane-making could end. 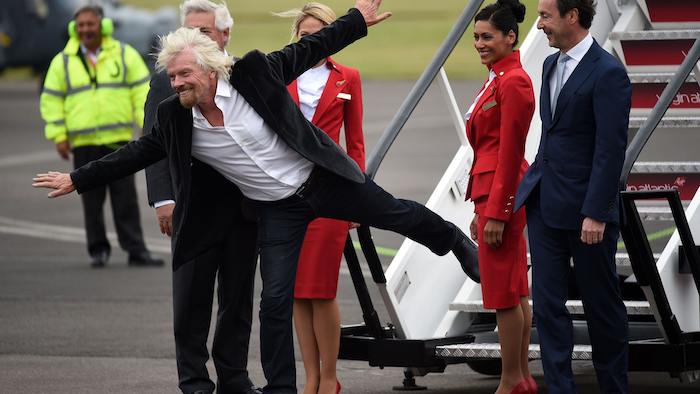 Virgin boss Richard Branson with Virgin Atlantic staff after they arrive aboard a new Airbus A350 at the Farnborough International Airshow in Farnorough, south England, Monday July 11, 2016. (Andrew Matthews / PA via AP)

Boeing and Airbus offered upbeat forecasts Monday for the aircraft market over the next 20 years, trying to tamp down worries that a long boom in plane-making could be ending.

The world's top plane makers see demand driven by a growth in travel, especially in Asia, leading to a doubling of the world's aircraft fleet.

Boeing Co. said it expects demand for 39,620 new planes worth $5.9 trillion over the next 20 years, an increase of 4 percent over the company's 2015 forecast. The Chicago-based company estimates that Asia will account for nearly 40 percent of demand.

Randy Tinseth, Boeing's vice president of marketing for commercial planes, said aviation will grow over the long term "despite recent events that have impacted the financial markets."

Europe's Airbus Group SE Airbus said growing urbanization and wealth in developing countries, especially in Asia, will drive 4.5 percent annual growth in travel. The company forecast demand for more than 33,000 new planes worth $5.2 trillion and said that by 2035, the world's fleet will have doubled from 19,500 to nearly 40,000 planes, many of them more fuel-efficient than current models. Virgin boss Richard Branson with Virgin Atlantic staff after they arrive aboard a new Airbus A350 at the Farnborough International Airshow in Farnorough, south England, Monday July 11, 2016. (Andrew Matthews / PA via AP)

There has been concern lately that lower oil prices and weakening economies in key markets including China could reduce the demand for new planes. Boeing and Airbus both have huge backlogs, as profitable airlines have placed big orders in recent years.

The new forecasts came on the opening day of the Farnborough International Airshow, a major industry event that is often the setting for announcements about new orders.

In the first big deal announced at the show, Britain is buying nine new Boeing P-8A Poseidon military aircraft. Defense Secretary Michael Fallon said the plane, which is based on the civilian Boeing 737, will help protect Britain's Trident nuclear submarines and aircraft carriers.

The Defense Ministry said that the cost of delivering the deal, including training, infrastructure and necessary support, will be around 3 billion pounds ($3.88 billion) over the next decade.

The deal is part of what Boeing and the U.K. describe as a new long-term partnership that will bring 2,000 new jobs to the U.K. That's an important boost to a government reeling from fears that jobs will be lost after Britain's decision to leave the European Union.