The spacewalkers set off to retrieve biological samples that have been outdoors seven years, and put out some new science trays. 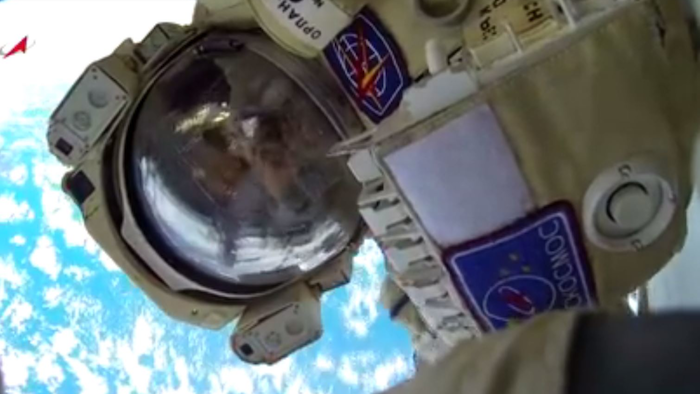 Two Russians took a spacewalk Wednesday to install fresh experiments outside the International Space Station and gather biological samples stuck outside for years.

First, though, cosmonauts Yuri Malenchenko and Sergey Volkov gave a ceremonial send-off to a flash drive containing special messages for their motherland.

The videos and messages pertain to the 70th anniversary of Russia's Victory Day last year. The flash drive was attached to a small bundle stuffed with towels to provide some bulk. Volkov set it loose as the space station soared 250 miles above the Pacific; the blue, cloud-specked Earth provided a stunning backdrop.

"There it goes," Volkov said in Russian as he tossed the package overboard with his right gloved hand. "Just beautiful," he noted as it spun slowly, appearing to tumble toward Earth.

Posted by Роскосмос on Saturday, September 12, 2015

The job was added just a few days ago. NASA said the jettisoned package would pose no hazard to the orbiting lab.

With that accomplished, the spacewalkers set off to retrieve biological samples that have been outdoors seven years, and put out some new science trays. They also planned to test a new glue that might prove useful in years to come on the station's exterior.

The Jan. 15 spacewalk had to be cut short because of the problem, a repeat of what happened to an Italian spacewalker in 2013. That first incident was considerably more serious, involving much more water leakage.

The Russians use different types of suits, so the problem was not expected to resurface. As for U.S. spacewalks, astronauts will go out only in an emergency until the leakage is understood and corrected, according to NASA.

Six men currently are living at the space station: three Russians, two Americans and one Briton.