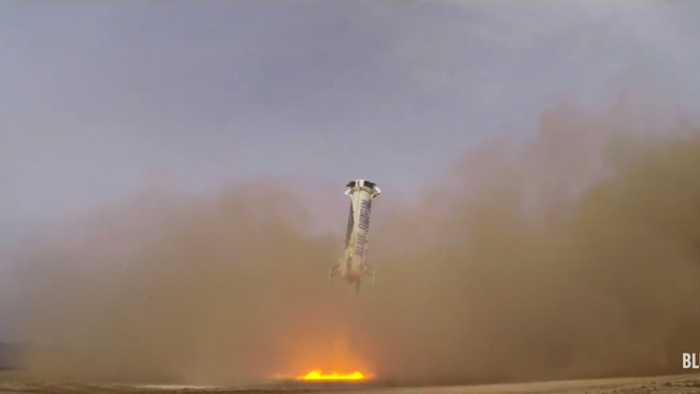 The New Shepard vehicle, named in honor of astronaut and first American in space Alan Shepard, took off at 11:21 a.m. CDT at Blue Origin’s launch site in West Texas. It reached 329,839 feet and Mach 3.72 before coming back to Earth and landing four and a half feet from its planned landing pad. This is the second test that has been conducted with New Shepard.

The controlled vertical landing required the re-ignition of the rocket booster at 4,896 feet above the ground. This took place at a relatively sedate 4.4 mph, a maneuver that Blue Origin founder Jeff Bezos said was “not easy, but done right, can look easy.” During this re-entry, a proprietary fin ring was used to help control the descent, and eight drag brakes reduced its speed. Hydraulically actuated fins were also used to steer the vehicle through 119-mph high-altitude crosswords to align it above the landing pad.

“Now safely tucked away at our launch site in West Texas is the rarest of beasts—a used rocket,” said Bezos. “Blue Origin’s reusable New Shepard space vehicle flew a flawless mission—soaring to 329,839 feet and then returning through 119-mph high-altitude crosswinds to make a gentle, controlled landing just four and a half feet from the center of the pad.”

The New Shepard is designed to carry six astronauts.

The rocket booster is powered by one American-made BE-3 liquid hydrogen and liquid oxygen engine, which delivers 110,000 pounds of thrust.

“We are building Blue Origin to seed an enduring human presence in space, to help us move beyond this blue planet that is the origin of all we know,” Bezos wrote in a blog post. “We are pursuing this vision patiently, step-by-step. Our fantastic team in Kent, Van Horn and Cape Canaveral is working hard not just to build space vehicles, but to bring closer the day when millions of people can live and work in space.”

Instead of working with commercial satellite companies or NASA, Blue Origin has been conducting its test flights on its own in relative secrecy. The flight of the New Shepard was only revealed after the fact. Blue Origins does plan to open its space flights up to the public soon, and ticketing information is currently available at their website.

He also noted that SpaceX’s Falcon 9 rocket, which has been in use by NASA along with the Dragon capsule, is designed to go to orbit. On the other hand, New Shepard was required to cruise at the edge of space for several minutes.

Getting to space needs ~Mach 3, but GTO orbit requires ~Mach 30. The energy needed is the square, i.e. 9 units for space and 900 for orbit.

Of course, landing a reusable rocket is still far from easy. Next, Blue Origin has to show that the New Shepard is truly reusable.

“Full reuse is a game changer, and we can’t wait to fuel up and fly again,” Bezos said.