The effort is aimed at developing a low-boom aircraft. 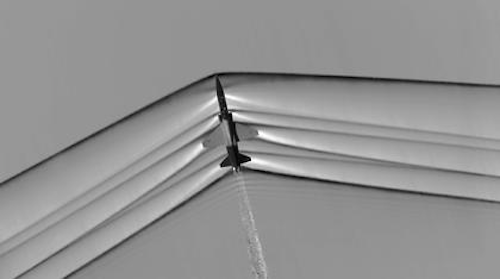 The technology NASA used to capture a new image of supersonic shock waves has its roots in a 150-year-old photography technique, known as schlieren imagery.

Originally used to capture fluid density and movement, the technique has been updated to something called the “background oriented schlieren” that can instead capture density gradients based on distortions of a speckled background. Those gradients clue researchers in on changes in the refractive index and shock waves.

In this case, NASA started with the backdrop of the Mojave Desert. Next, they took a series of images at 109 frames per second of a T-38C plane in supersonic flight, courtesy of two high-speed cameras attached to a Beechcraft B200 King Air subsonic plane.

Coordinating the flights of the two planes was key. For the images to be effective, the crafts had to fly very closely together with precisely aligned paths.

“These passes posed a unique safety and technical challenge due to the small window of time during which the camera could view the target aircraft,” said Air Force Maj. Jeremy Vanderhal, co-pilot of the T-38C.

The photos in this series, known as the AirBOS 3, were taken in February — over several weeks of experimental flights — but were only recently released. The first AirBOS photo shoot was held in 2011.

“The end goal is to facilitate the ability for a new speed regime and open a new commercial market for civil transportation,” says Tom Jones, CST’s associate project manager.