NASA’s New Heat Shield Could Get Humans On Mars 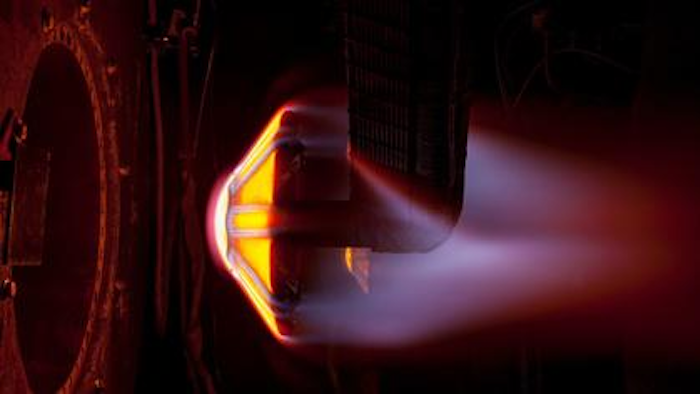 NASA is one step closer to sending man to Mars with its latest heat-shield concept, named ADEPT, or Adaptive Deployable Entry and Placement Technology.

To put it in NASA terms, “The objective of ADEPT is to develop a semi-rigid low-ballistic coefficient aeroshell entry system concept to perform and entry descent landing (EDL) functions for planetary missions.”

In other words, if NASA plans to send manned missions to the Red Planet, they need this new technology to protect the larger spacecraft from the extreme heat caused by entering an atmosphere. The shield, which opens like an umbrella, will also help the craft to decelerate quickly in Mars’ thin atmosphere.

ADEPT uses a mechanically deployed carbon-fabric shell, with resin-infused layers protecting the fabric joints, that re-radiates heat before it reaches the spacecraft. The shell is held in place by semi-rigid ribs.

Engineers with NASA’s Ames Research Center in Silicon Valley recently conducted a test of the new 6.5-foot prototype, recreating the harsh conditions it will encounter, such as being blasted by temperatures up to 3,100 degrees Fahrenheit.

The use of cloth instead of the typical hard plastic also lightens the new system, meaning it will endure less stress and won’t require an additional parachute to slow the craft down. For example, a 23-foot-wide ADEPT shield would reduce the g-load — or deceleration force — to 30Gs, as compared with 200-450Gs of the rigid aeroshells.

The lighter design will also allow for more precise maneuvers, and it can potentially be flipped inside-out to act as a tent for crew members upon landing.

NASA hopes to use this technology to get robotics to Mars by 2020, with humans to follow by 2035.