The sky over Pluto might not be sunny, but it's undoubtedly blue. 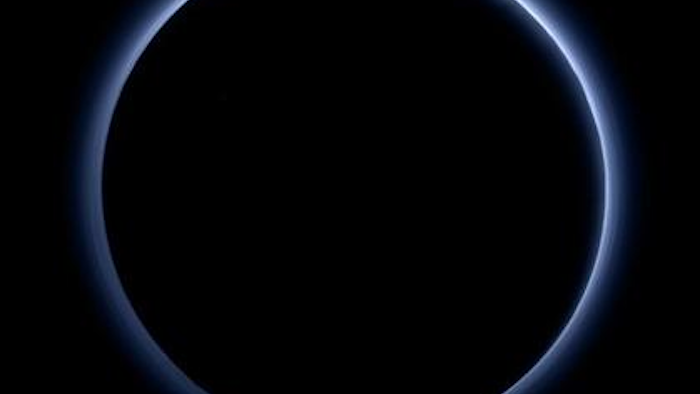 The sky over Pluto may not be sunny, but it's undoubtedly blue.

NASA's New Horizons spacecraft discovered Pluto's blue sky during the historic flyby of the icy dwarf planet in July. The images of Pluto's atmospheric haze were beamed down last week and released by NASA on Thursday.

The particles in the atmospheric haze are actually red and gray, according to scientists. But the way the particles scatter blue light is what has everyone excited about the dwarf planet orbiting on the far fringes of our solar system, a twilight zone known more formally as the Kuiper Belt.

"Who would have expected a blue sky in the Kuiper Belt? It's gorgeous," Alan Stern, the principal scientist for New Horizons, said in a NASA release about the latest images.

The blue tint can help scientists understand the size and makeup of the haze particles surrounding Pluto, where twilight constantly reigns given the 3.6 billion-mile distance between it and the sun.

Pluto's high-altitude haze seems to be comparable to that of Saturn's moon, Titan, according to NASA, and the result of interaction between molecules.

In another finding Thursday, scientists have uncovered numerous ice patches on Pluto's surface. The exposed water ice appears to be, mysteriously, red.

Scientists said they are uncertain why the ice appears in certain places at Pluto and not others.

Launched in 2006, New Horizons is now 63 million miles beyond Pluto. Johns Hopkins University in Maryland is operating the spacecraft for NASA.