The Northrop-Grumman-built Global Hawk drone is considered particularly valuable because it can conduct long-range missions without the limitations of pilot fatigue, is able to fly at a maximum 60,000 feet and can "loiter" around any particular site of interest for 24 hours or more. 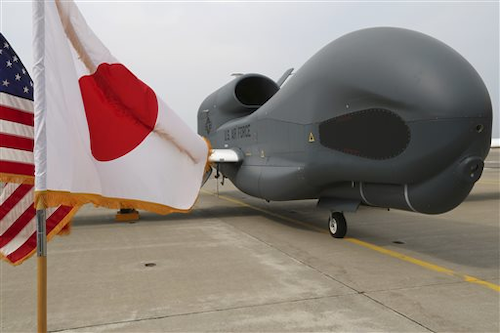 MISAWA AIR BASE, Japan (AP) -- The U.S. Air Force has deployed two of its most advanced long-distance surveillance drones to a base in northern Japan over the past week, enhancing its ability to monitor nuclear activities in North Korea and Chinese naval operations.

The deployment of the two unarmed Global Hawk drones to Japan, a key U.S. ally, is intended to demonstrate Washington's commitment to security in Asia as part of its rebalancing of forces to the Pacific. But it will likely rankle with China and North Korea, which have been working to improve their own unmanned aircraft fleets.

Lt. Gen. Sam Angelella, commander of U.S. Forces Japan, said Friday the drones will remain here until October, when the typhoon season on the drones' home base on the Pacific island of Guam is over. Similar rotations from Guam to Misawa are expected in the future, though Angelella said no firm plans have been made. He refused to comment on the specific missions the drones will carry out but noted that the Global Hawk's "capabilities are well known."

The Northrop-Grumman-built Global Hawk drone is considered particularly valuable because it can conduct long-range missions without the limitations of pilot fatigue, is able to fly at a maximum 60,000 feet (18.3 kilometers) and can "loiter" around any particular site of interest for 24 hours or more.

From Japan, it can easily monitor areas on the Asian mainland — including North Korea's nuclear sites — or targets at sea — such as areas where China and other countries have had confrontations over territory.

The military keeps much of the Global Hawk's work secret, but Angelella spoke of its use in humanitarian missions including Japan's 2011 tsunami and the devastating typhoon that hit the Philippines last year. More recently, he said, the drone was used in surveillance work following the mass abduction of more than 300 girls in Nigeria by Islamic extremists.

The deployment of the drones will also help Japan familiarize itself with the aircraft. Tokyo plans to buy three Global Hawks.

Angelella said the aircraft has proven itself to be one of the most reliable in the Air Force. While still under development, the Global Hawk began supporting overseas contingency operations two months after the Sept. 11, 2001, attacks. As of September last year, it had surpassed 100,000 flight hours, three-quarters of which were performed in combat.

Safety is a key factor in Japan because many U.S. bases here are located in heavily populated areas.

Under a mutual security pact, the U.S. maintains about 50,000 troops in Japan, which is home to several major air bases, the headquarters of the U.S. 7th Fleet and more than 10,000 Marines.

Though some residents of the city of Misawa have raised concerns about the drone deployment, opposition has been notably muted compared to the often emotional and deep-rooted protests against the deployment of new aircraft or troops on the southern Japan island of Okinawa, where most of the U.S. military in Japan is based.

But the deployment comes at a politically sensitive time.

Tokyo is now hotly debating a significant revamp of the role of its military forces, which have since World War II been rebuilt and are now one of the strongest in Asia, though they remain restricted to a narrowly defined strategy of national defense.

Citing the perceived threats from China and North Korea, Japan's Prime Minister Shinzo Abe is championing an effort to change that and allow the Japanese military to be able to fight more closely with U.S. troops in contingencies.