The director of the International Air Transport Association said Monday he wants to see a globally agreed upon tracking standard in place by the end of this year, which also takes into consideration the cost on airlines. 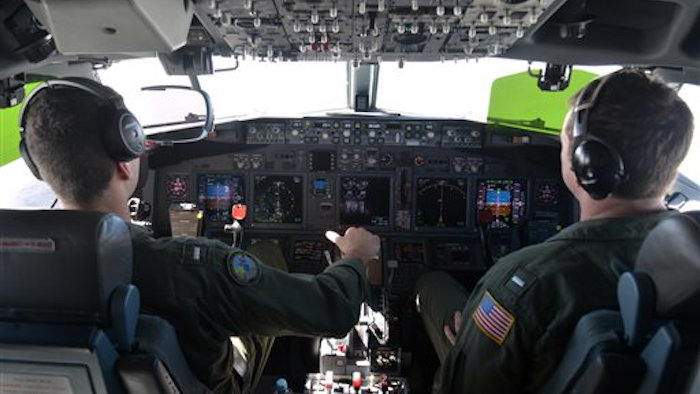 ABU DHABI, United Arab Emirates (AP) -- The director of the International Air Transport Association said Monday he wants to see a globally agreed upon tracking standard in place by the end of this year, which also takes into consideration the cost on airlines, in order to avoid another disappearance like that of Malaysia Airlines Flight 370.

Tony Tyler told a small media gathering in Abu Dhabi at the Global Aerospace Summit that the cost of tracking will have to be examined in any decision. He said profit margins for the global industry this year are still very narrow and expected to be around $5.65 per passenger.

"Clearly cost is one of the issues that will have to be considered when we are looking at what to do about it. And we have to make sure that what we do is something that the airlines can afford," said Tyler.

IATA has 240 member airlines carrying 84 percent of all passengers and cargo worldwide.

Tyler said that regulation must be driven by the United Nations' International Civil Aviation Organization.

IATA announced earlier this month it is creating a task force comprised of manufacturers of aircraft, the suppliers of the equipment used for communication from aircraft, satellite providers and rescue crews to make recommendations by the end of the year on how commercial aircraft can be tracked continuously.

"What we'll be doing in the task force is really bringing together all of the people who need to think about this problem," he said.

Some jets use satellites to regularly send maintenance data back to headquarters. Malaysia Airlines did not opt to subscribe to this service from Boeing. The jet's disappearance has many calling for airlines to live stream information from planes' voice and data recorders.