Boeing says that it has picked Everett, Wash., as the site to build wings for its new 777x aircraft. The company said Tuesday that the wing center will be located north of its Everett factory and sustain thousands of area jobs in the years to come. 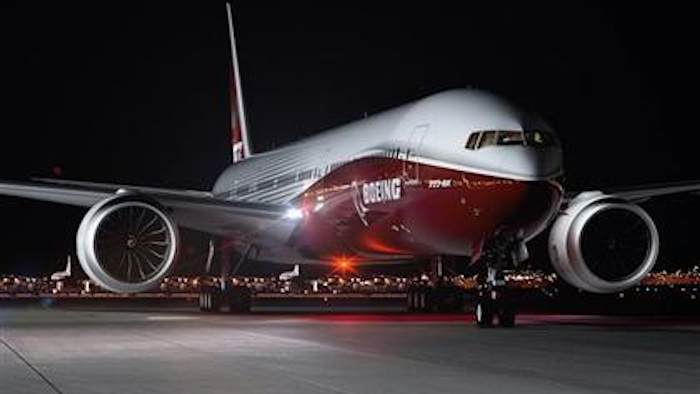 EVERETT, Wash. (AP) -- Boeing says that it has picked Everett, Wash., as the site to build wings for its new 777X aircraft.

The company said Tuesday that the wing center will be located north of its Everett factory and sustain thousands of area jobs in the years to come. Construction on the new facility is scheduled to begin later this year.

On Jan. 3, area Boeing machinists narrowly approved a contract in which they conceded some benefits in order to secure assembly of the new 777X in Washington state. The same machinists rejected a Boeing contract proposal in November. Local union leaders had argued against a second vote, saying the offers were too similar. National Machinists union leaders pushed for — and got —the second vote.

Because of the large size of the 777X wing, a location close to the Everett final-assembly line was seen as a logical choice. At 114 feet long and 23 feet wide, the 777X wing will be the largest Boeing has ever built.

"Locating the new composite wing center in Everett is a win for all of our teammates and partners," Boeing Commercial Airplanes CEO Ray Conner said in a statement. "This will put our workforce on the cutting edge of composite technology and allow us to build on the infrastructure and logistics system we have in Everett."

The Chicago-based company plans to deliver its first 777x aircraft in 2020.

More than 20 other states moved recently to bid for work on the 777X, an updated version of Boeing's best-selling 777. The company received orders for 225 new 777X planes from three airlines at the Dubai Airshow. The 777X is expected to carry as many as 400 passengers and be more fuel efficient than the 777.

The company told its customers to address the matter before flying the embattled aircraft further.
Apr 9th, 2021
Follow Us
Most Recent