N.C. Would 'Do Anything' For Boeing Plant; 7K Jobs

Assembling one of the largest package of tax breaks and other incentives in North Carolina history earned the state consideration for as many as 7,250 Boeing aircraft manufacturing jobs — but its $683 million offer was dwarfed by Washington state's winning promise of nearly $9 billion in corporate sweeteners.

RALEIGH, N.C. (AP) -- Assembling one of the largest package of tax breaks and other incentives in North Carolina history earned the state consideration for as many as 7,250 Boeing aircraft manufacturing jobs — but its $683 million offer was dwarfed by Washington state's winning promise of nearly $9 billion in corporate sweeteners.

North Carolina and about 20 other states offered lavish tax breaks, free land and other enticements to land the thousands of jobs needed to build the 777X, a jet designed to be more fuel efficient than Boeing's strong-selling 777 airliner.

North Carolina's pitch — which would have been boosted by local offers — was more than double the largest the state has dangled and successfully landed an employer. Dell Inc. was offered more than $300 million in state and local incentives in 2004 to open a computer assembly plant near Winston-Salem. Most state incentives were never paid, and Dell repaid local governments $26 million in upfront spending after the plant closed in 2010.

Boeing was shopping for offers for a site to assemble the new 777X airliner two days after union machinists in the Seattle area rejected a contract on Nov. 13 that would have cut worker benefits, according to North Carolina recruiting documents and emails released to The Associated Press in response to a public records request.

Gov. Pat McCrory spoke to a Boeing executive by phone two days after the union vote and met with others the following week on the sidelines of a Republican Governors Association meeting in Phoenix, recruiting records showed.

"We will do ANYTHING we can to be helpful with your site selection process," former McCrory adviser Jonathan Felts said in a memo describing what "PLM" told Boeing executives, a likely reference to Patrick Lloyd McCrory. The governor's office did not respond to requests to clarify the identity of PLM.

Executives for the jet-building giant "said that 'financial incentives' were not going to determine their final decision but that they are not opposed to 'love,' " Felts wrote.

Time for making an impression was tight. Boeing wanted to be ready with an alternative site by January 2014, shortly after a Jan. 3 union vote on whether to reconsider and accept the benefit cuts, emails showed. Plant construction would begin in November and hiring for the first job was due to start in January 2015, state recruiters said.

Those packages were never offered to Boeing, in part because they would have included special tax breaks requiring legislative approval, state Commerce Department spokesman Josh Ellis said. The General Assembly is not scheduled to open its annual meetings until May, though McCrory could call them into a special session.

"These types of manufacturing operations have a very large multiplier effect," Ellis said, adding that parts manufacturers would be certain to cluster near the aircraft plant. "That's the real reason states are interested. It's not just the 7,000 jobs you're talking about here."

Boeing told North Carolina officials they were out of the running on Dec. 20, emails showed.

Boeing's negotiations with Missouri and other finalist states ended after union members in Washington's Puget Sound voted Jan. 3 to accept the company's contract offer. The Chicago-based company then quickly announced that it would assemble the 777X in its traditional, Seattle-area operating base.

Each minute saved increases the chances of survival.
Aug 30th, 2021 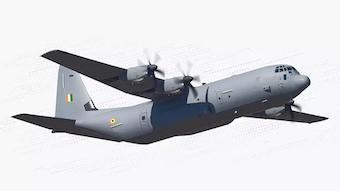 Eight employees representing Lockheed Martin, GE and Rolls-Royce will serve as on-site technical support for the duration of the contract.
Aug 25th, 2021
Follow Us
Most Recent