China's troubled robotic moon rover — given voice by a government news agency — melodramatically pondered the meaning of its perhaps-fleeting existence, measured its contribution to humanity and, finally, said goodbye. Then it shut down for the lunar night, which lasts about 14 earth days — its status unclear. 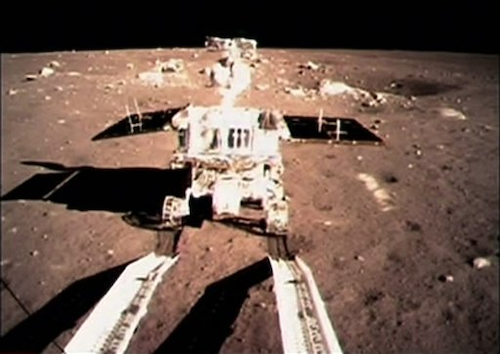 BEIJING (AP) -- The Jade Rabbit did not go quietly into that long lunar night.

Instead, China's troubled robotic moon rover — given voice by a government news agency — melodramatically pondered the meaning of its perhaps-fleeting existence, measured its contribution to humanity and, finally, said goodbye.

Then it shut down for the lunar night, which lasts about 14 earth days — its status unclear.

The Jade Rabbit's fans in China sent Lunar New Year greetings to the robot Friday, wishing it a speedy recovery from a malfunction it reported before going into hibernation.

"Chinese people have been worried about the Jade Rabbit," wrote a microblogger with the username Yang Huiyan. "Hope the New Year will bring good luck to him."

The official Xinhua News Agency had carried what it described as a diary entry the rover "wrote" before it shut down.

Despite being usually staid in their coverage of national events, Chinese state media tend to put a folksy touch on certain stories that help drum up national pride. State news outlets are especially fond of giving cutesy personalities to non-human actors playing key roles in propaganda efforts, whether they are pandas returning from zoos abroad or, in the Jade Rabbit's case, the stars of its military-backed space program.

In the Xinhua diary entry, the Jade Rabbit takes on the tone of a heroic adventurer who has encountered an obstacle that might prove insurmountable, and who is trying to put on a brave face as it pens what might be its final farewell.

"If this journey must come to an early end, I am not afraid," said the six-wheeled, solar-powered rover. "Whether or not the repairs are successful, I believe even my malfunctions will provide my masters with valuable information and experience."

The personification of the rover has been a hit with the Chinese public. Parts of the Xinhua report were quoted by an unofficial Chinese microblog account written with the Jade Rabbit's voice, and the blog was flooded with tens of thousands of sympathetic comments.

As for the rover's fate, a report Thursday by the state-run Science and Technology Daily newspaper said that would only be clear at the end of the lunar night. Calls to the space program rang unanswered Friday, a public holiday.

On Sunday, the rover said its "masters" — the space program's engineers, presumably — had found an abnormality in its control mechanism and were working through the night to fix it. It provided no details on what the problem was, but hinted that it was serious.

"Even so, I know I may not make it through this lunar night," it said, striking a somber note.

The Jade Rabbit began operating last month after making the first soft landing on the moon by a space probe, Chang'e 3, in 37 years. The moon lander is named after Chang'e, a mythical goddess of the moon, and the rover, after Yutu, or "Jade Rabbit" in English, the goddess' pet.

In the diary entry, the Jade Rabbit recounted its achievements in the 42 days it spent on the moon, saying it traveled more than 100 meters (110 yards) and collected a large amount of scientific data with a panoramic camera, radar and other equipment.

But in a line clearly written with the aim of tugging at heartstrings, the Xinhua report had the Jade Rabbit appealing to its readers to take care of the space craft that brought it to the moon, Chang'e, in the rover's absence.

"If I really cannot be fixed, when the time comes, I hope everyone will remember to help me comfort her," it said.

The rover was designed to roam the lunar surface for three months while surveying for natural resources and sending back data. Then it ran into problems as it was shutting down in preparation for the lunar night when the temperature drops to minus 180 degrees Celsius (minus 292 degrees Fahrenheit).

"The sun has already set here and the temperature is falling very quickly. I've said a lot today, yet still feel like it's not enough," the rover said in its concluding paragraphs. "I'll tell everyone a secret. Actually, I'm not feeling especially sad. Just like any other hero, I've only encountered a little problem while on my own adventure."