Thousands of the nation's historic air and space artifacts — including a Navy dive bomber from World War II and spacesuits from the Apollo era — are slowly being moved from a cramped site in Maryland to a state-of-the-art Smithsonian conservation hangar in northern Virginia. 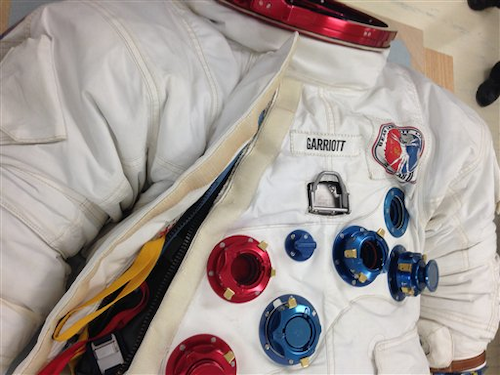 CHANTILLY, Va. (AP) -- Thousands of the nation's historic air and space artifacts — including a Navy dive bomber from World War II and spacesuits from the Apollo era — are slowly being moved from a cramped site in Maryland to a state-of-the-art Smithsonian conservation hangar in northern Virginia.

Faced with an ongoing shortage of suitable space to preserve its massive collection, the Smithsonian Institution's new air and space warehouse is a bright spot for the museum complex. The National Air and Space Museum opened its Udvar-Hazy Center annex in Virginia 10 years ago with a design to store thousands of artifacts on display. Now over the past year, the site has also opened a massive $79 million restoration hangar and conservation lab with additional storage space for artifacts.

Conservators will offer the public the first behind-the-scenes look at the facility during a free open house Saturday. Visitors can meet with curators and archivists and learn how aircraft and fragile pieces are cared for.

Last year, the Smithsonian's inspector general testified in Congress that the continued use of substandard facilities elsewhere posed a risk to important art and science collections. One site in Maryland was built in the 1950s and 1960s as a temporary holding site that became permanent.

Chief Conservator Malcolm Collum said Thursday that the museum now has a conservation lab to meet the highest standards of any aerospace museum.

"This is a huge leap forward," he said. "The space we're in now is approximately 10 times larger just in volume. But we've also increased our analytical capability immensely."

Apollo-era spacesuits, which are now 40 and 50 years old, are fragile, brittle and deteriorating, so conservators have been studying how to slow the decay. A special room in the new facility was designed as a cool, dark place to store the historic spacesuits.

So far, 8,000 artifacts have been relocated from the Smithsonian's outdated Garber facility in suburban Maryland to the new site near Dulles International Airport in Virginia. They're being moved one by one around the nation's capital. At the current pace, all the small artifacts are to be installed at the new site by 2018, along with about 1,500 medium-size artifacts.

Larger artifacts will have to wait until additional buildings are constructed by 2030, depending on funding. In total, 39,000 artifacts still must be moved in the years to come.

The Smithsonian's aerospace hangar has grown to become Virginia's most-visited museum. When it opened 10 years ago, there were just 348 artifacts on display. Now there are more than 3,000, including the space shuttle Discovery and the Enola Gay B-29 bomber that dropped the atomic bomb on Japan in World War II.

Visitors can also look down on the massive restoration hangar to see ongoing projects.

The first major restoration effort in the new facility is the preservation of a U.S. Navy Helldiver dive-bomber plane used against Japan in World War II. Another plane that survived the Pearl Harbor bombings is among the next projects. Conservators carefully disassemble each piece, document their work, repair damage and corrosion and reassemble each plane.

"I hope the main thing visitors see is the extent of detail that we work on," said restoration specialist Anne McCombs. "We literally pay attention to every screw, every piece of hardware."