The government granted six movie and television production companies permission to use drones for filming, an important step toward greater use of the technology by commercial operators, Transportation Secretary Anthony Foxx announced Thursday. Dozens of other industries are... 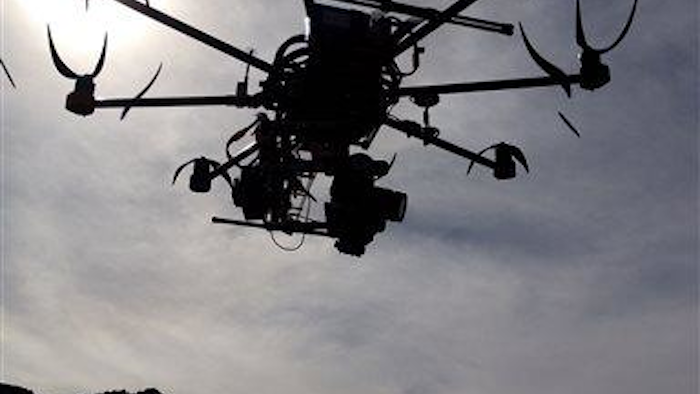 The government granted six movie and television production companies permission to use drones for filming, an important step toward greater use of the technology by commercial operators, Transportation Secretary Anthony Foxx announced Thursday.

Dozens of other industries are lined up to follow Hollywood's lead. Until now, the Federal Aviation Administration, which is part of the Transportation Department, had banned commercial drone operations with the exception of a lone oil company in Alaska.

However, the FAA permits come with limitations, including that the unmanned aircraft be used only in a restricted area and that they be flown under 400 feet in altitude and within the line of sight of an operator who holds a private pilot's license. Each aircraft must be inspected before flight, and nighttime flights are prohibited. Reality television shows or other unscripted events won't qualify for the permits.

"Today's announcement is a significant milestone in broadening commercial (drone) use while ensuring we maintain our world-class safety record in all forms of flight," Foxx said. "These companies are blazing a trail that others are already following, offering the promise of new advances in agriculture and utility safety and maintenance."

Brendan Schulman, a New York attorney who represents several drone operators and interest groups that have challenged the FAA's drone restrictions, said he is concerned that limitations attached to the drone permits may be so onerous that their benefits will be outweighed by the cost and the headache of complying.

"I'm worried that it's too small a step forward and it's too narrowly limited," he said.

The FAA is considering 40 requests for exemptions from other commercial entities. Congress and industries that want to use or sell the technology have been pressuring the FAA to relax its ban. Companies want to use drones to monitor pipelines, inspect the undersides of oil platforms and bridges, and spray crops. Amazon and Google want to use them to deliver packages. Wedding videographers, real estate agents, journalists and many others are clamoring to use them as well.

The only previous FAA permit for commercial drone operations was granted to the Conoco Phillips oil company, which has flown two kinds of unmanned aircraft in unpopulated areas of Alaska and over the Arctic Ocean with significant limitations on their use.

But the commercial drone ban is being undermined daily. Many operators see no harm in flying small, lightweight drones, often no bigger than a backpack, despite FAA warnings that they could collide with manned aircraft or injure people on the ground. Even a congressman who is a member of the House committee that oversees the FAA, Rep. Sean Patrick Maloney, D-N.Y., hired a photographer to produce a video of his wedding using a camera mounted on a small drone.

In 2012, Congress directed the FAA to safely integrate drones of all sizes, from high-flying Global Hawks to small quadrocopters weighing no more than a few pounds, into the national airspace. But the agency has missed several milestones and isn't expected to meet Congress' deadline of October 2015 for full integration.

In November, the agency is expected to propose rules commercial operators can follow to fly drones weighing 55 pounds or less. But it could be months or years before the rules are final. Final rules for larger ones are even further off.

The six production companies — Aerial MOB LLC, Astraeus Aerial, HeliVideo Productions LLC, Pictorvision Inc., Vortex Aerial and Snaproll Media LLC — have been working with the Motion Picture Association of America for two years to win FAA approval. A seventh aerial video company that applied with the other companies, Flying-Cam Inc., has been asked by the FAA to supply additional information.

Tony Carmean, a partner in Aerial MOB of San Diego, predicted drones will fundamentally change moviemaking, providing directors with the ability to get shots they could never get before and making films more dynamic. Small drones with video cameras will be able to fly through a building and in and out of windows, for example, he said. They are also far less expensive than hiring a manned helicopter, he said.

Major movie studios "want their hands on this right away," but have held off using the technology until the FAA gives the go-ahead, he said.

Drones have already been used in in filming some movies overseas, including "Skyfall" and "Transformers: Age of Extinction."