India's space agency released a blurry image of Mars pockmarked with giant craters, taken by the nation's first interplanetary spacecraft after it began orbiting the red planet. The image released Thursday was taken while the Martian Orbiter Mission, or MOM, was about... 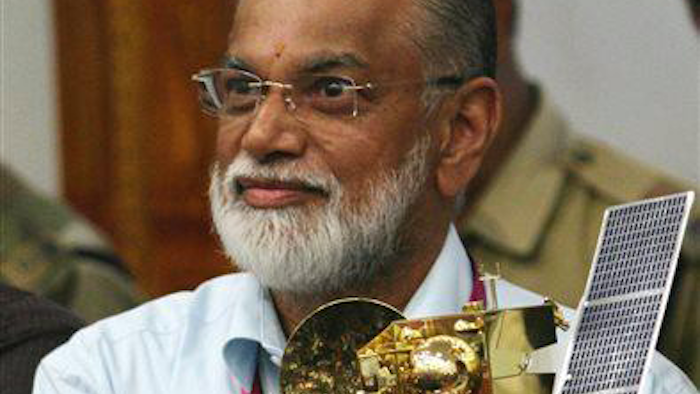 The image released Thursday was taken while the Martian Orbiter Mission, or MOM, was about 7,300 kilometers (4,536 miles) from the planet's surface, according to the Indian Space and Research Organisation. It took at least 12 minutes for the digital data to reach Earth.

Space agency scientists released the image after first bringing it to New Delhi to show to Prime Miniser Narendra Modi, who had spent Wednesday morning witnessing the satellite's last maneuvers into orbit from the space agency's Mars command center in the southern city of Bangalore.

"The view is nice up here," scientists tweeted under a special mission profile, @MarsOrbiter, which has gained more than 95,000 followers since being set up on Tuesday.

Modi responded through his Twitter feed: "Yes, I agree @MarsOrbiter, the view is indeed nice up there!"

The satellite will spend the next six months on an elliptical orbit — coming as close as 365 kilometers (227 miles) and swinging out to 80,000 kilometers (49,700 miles) at its farthest — as it collects scientific data on the Martian atmosphere.

India was enthralled with the mission's success. Indian newspapers on Thursday ran front-page stories and two-page spreads detailing the mission. Museums opened special educational exhibitions. Indian celebrities and politicians commended the rare feat, which only the U.S., former Soviet Union, and European Space Agency have succeeded at before.

"It was an impressive engineering feet, and we welcome India to the family of nations studying another facet of the Red Planet. We look forward to MOM adding to the knowledge the international community is gathering with the other spacecraft at Mars," the statement said.

NASA on Sunday had its own success in placing its Mars Atmosphere and Volatile Evolution mission, or Maven, in orbit around the planet. There are two other NASA satellites and one ESA craft also now orbiting Mars, while two NASA rovers are on the surface.