The crash in the Islamic Republic comes as its airlines fly aging aircraft and have trouble getting replacement parts, even though an interim deal on its contested nuclear program has ... 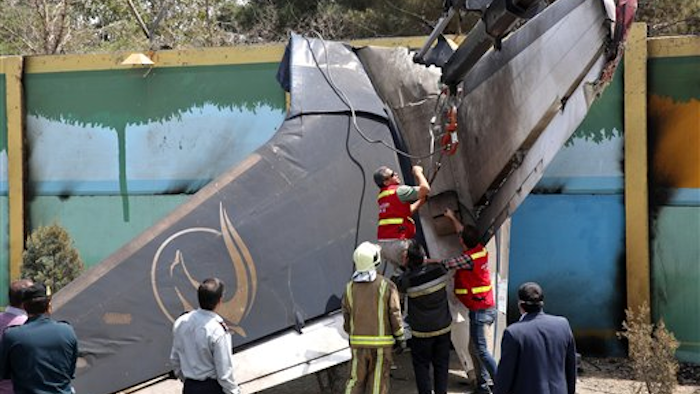 A survivor in the Iranian plane crash that killed 39 people said Monday that one of the engines in the turboprop went out after takeoff, though authorities said they were still trying to determine what brought the plane down.

The crash in the Islamic Republic comes as its airlines fly aging aircraft and have trouble getting replacement parts, even though an interim deal on its contested nuclear program has loosened some economic sanctions.

Some lawmakers have questioned the use of the IrAn-140, a twin-engine turboprop plane built with Ukranian technology off an old Soviet-era design, and President Hassan Rouhani has ordered them grounded until investigators determine a cause for Sunday's crash.

"Iranian people deserve more than this. They don't deserve to suffer plane crashes," Mohammad Abedzadeh, who survived the crash with his wife, told The Associated Press. "I have nothing to do with politics. As a human being, I want all passenger plane ... sanctions to be totally lifted. We are talking about human lives, not politics."

Abedzadeh said that the plane was only in the air for three minutes. He said he looked out the window and could see one of the propellers not moving after it ascended.

The crash tore away the plane's tail, leaving it upright on a road. Abedzadeh said he and his wife escaped and tried to save others, but the ensuing fire that engulfed the aircraft burned his hand and face.

"Everything happened within seconds," he said. "It was like a movie. Still I can't believe it."

The cause for the crash remained unknown Monday. Ali Reza Jahangirian, the country's Civil Aviation chief, told state television that one engine did go out, but the plane should have been able to fly. He said the reason for the crash will be determined once officials analyze data from the airplane's black boxes.

Iranian airlines, including those run by the state, are chronically strapped for cash, rely on aging planes and have a spotty maintenance record.

While some operate Boeing and Airbus models, spare parts for Western-made planes are often hard to come by — largely because of sanctions aimed at Iran's nuclear program.

Those difficulties have left Iranian airlines increasingly reliant on planes developed by the Soviet Union and its successor states, though parts for aging Soviet-era planes can also be tough to get. That's caused the country to be hit by a series of deadly crashes.

Retired Iranian pilot Houshang Shahbazi said that the U.S. and the European Union be blamed for the crashes.

"The responsibility of such accidents is on countries that impose sanctions on us because they have forced my country to turn to faulty aircrafts such as IrAn-140," Shahbazi said. "We have been under sanctions for about 35 years and unfortunately, it has been an extremely blind sanction imposed by the United States and the West."

The deal gave a lift to the order book for the Max, which was grounded for nearly two years.
Nov 17th, 2021

He traveled to the edge of space with William Shatner on a Blue Origin spacecraft last month.
Nov 15th, 2021