A locally built Iranian passenger plane crashed shortly after takeoff in Tehran on Sunday, killing 39 people and reviving questions about the safety of a cash-strapped aviation sector left hobbled by international sanctions. The plane was based on a ... 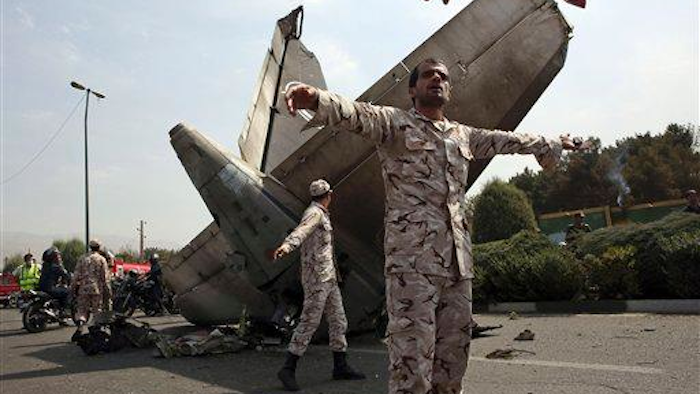 A locally built Iranian passenger plane crashed shortly after takeoff in Tehran on Sunday, killing 39 people and reviving questions about the safety of a cash-strapped aviation sector left hobbled by international sanctions.

President Hassan Rouhani offered his condolences to victims' families and quickly ordered an investigation into the crash. Similar planes operated by Iranian carriers will be grounded until the probe is complete, he directed.

The plane was based on a relatively obscure Ukrainian design that has been involved in previous Iranian air disasters.

The Sepahan Air regional airliner, bound for the eastern town of Tabas, went down in a residential area shortly after takeoff at 9:20 a.m. from Tehran's Mehrabad airport.

State TV said the plane's tail struck the cables of an electricity tower before it hit the ground and burst into flames. The official IRNA news agency said the plane suffered an engine failure. Whatever the ultimate cause, quick thinking by the pilot may have saved some lives.

"We should be thankful to God that the pilot did all he could to steer the plane away from residential buildings and fortunately did not crash into them. Otherwise, we would have been dealing with a much worse crisis," said Jalal Maleki, spokesman of Tehran's Fire Department.

Known as an IrAn-140 or Iran-140, the twin-engine turboprop is a version of the Antonov An-140 regional plane and is assembled under license in Iran. It can carry up to 52 passengers.

A Ukranian-made An-140 crashed near the central Iranian city of Isfahan in 2002, killing 46 mostly Ukranian and Russian experts traveling to witness the maiden flight of the Iranian-built version of the plane.

A similar Iranian-made version crashed during a training flight in Isfahan in February 2009, killing five onboard, according to a report by state-run Press TV at the time.

Iranian airlines, including those run by the state, are chronically strapped for cash, rely on aging planes and have a spotty maintenance record.

While some operate Boeing and Airbus models, spare parts for Western-made planes are often hard to come by — largely because of sanctions aimed at Iran's nuclear program.

Those difficulties have left Iranian airlines increasingly reliant on planes developed by the Soviet Union and its successor states, though parts for aging Soviet-era planes can also be tough to get.

At the crash site, members of the elite Revolutionary Guard worked to secure the scene from onlookers while security and rescue personnel combed the wreckage. The plane's mangled but largely intact tail section was torn from the fuselage and came to rest on a nearby road.

State TV said the bodies of some of the victims were so badly burned that they could not be identified. They will be handed over to relatives after DNA tests are carried out to determine their identities, it said.

Eyewitness Hassan Molla said he heard a roaring sound as the plane came in low overhead, one wing tilting.

"There was no smoke or anything. It was absolutely sound and in good condition" before the crash and what appeared to be multiple explosions, he said.

An official for Sepahan Air told The Associated Press from the central city of Isfahan that the carrier is affiliated with the Iran Aircraft Manufacturing Industrial Company, also known as HESA. The airline was set up in 2010 and has not had any previous crashes, said the official, who refused to provide his name.

HESA has ties to Iran's Ministry of Defense and is the company that assembles the IrAn-140.

Lawmaker Mehrdad Lahouti suggested Sunday that the earlier accident should have been a wake-up call.

"Lawmakers visited the production site of the plane and expressed concern about its (safety)," IRNA quoted him as saying. "This company should have not been allowed to operate the plane to avoid such a bitter incident."

President Hassan Rouhani ordered that airlines stop using this type of plane until a full investigation is carried out.

Rouhani also expressed condolences to the family of the victims and ordered Health Minister Hassan Ghazizadeh Hashemi to take all the necessary measures to treat and provide adequate care to those injured in the incident, his website, president.ir, reported.

Mehrabad, located in western Tehran, is the busier of two main airports serving the capital, and primarily handles domestic flights. Most international flights use the newer Imam Khomeini International Airport.

The country's creaking airline industry has been hit by a series of deadly crashes.

In March of this year, a small plane belonging to the State Aviation Organization crashed while on a test flight near the tourist resort of Kish Island, killing all four crew members.

The last major airliner crash in Iran happened in January 2011, when an Iran Air Boeing 727 broke to pieces on impact while trying an emergency landing in a snowstorm in northwestern Iran, killing at least 77 people.

In July 2009, a Russian-made jetliner crashed in northwest Iran shortly after taking off from the capital, killing all 168 on board. A Russian-made Ilyushin 76 carrying members of the Revolutionary Guard crashed in the mountains of southeastern Iran in February 2003, killing 302 people aboard.