After a journey of 4 billion miles, Europe's unmanned Rosetta probe reached its destination Wednesday, a milestone in mankind's first attempt to land a spacecraft on a comet. 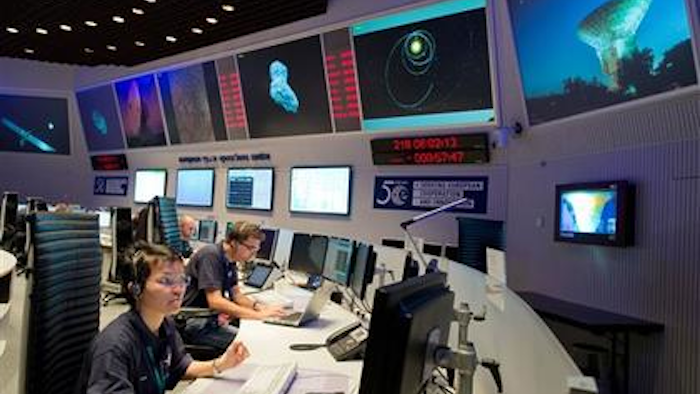 DARMSTADT, Germany (AP) -- After a journey of 6.4 billion kilometers (4 billion miles), Europe's unmanned Rosetta probe reached its destination Wednesday, a milestone in mankind's first attempt to land a spacecraft on a comet.

The decade-long trip was successfully completed with a seven-minute thrust that allowed Rosetta to swing alongside comet 67P/Churyumov-Gerasimenko somewhere between the orbits of Mars and Jupiter.

"This is your only chance to have a rendezvous with a comet," Jean-Jacques Dordain, director-general of the European Space Agency, told scientists and spectators watching the maneuver at the mission control center in Darmstadt, Germany.

The goal of the mission is to orbit 67P at a distance of about 100 kilometers (60 miles) and observe the comet as it hurtles toward the sun. If all goes according to plan, Rosetta will drop the first ever lander onto a comet in November.

Scientists hope this will help them learn more about the origins of comets, stars and planets, said David Southwood, who oversaw the scientific part of the mission until his recent retirement.

"Comets are the stuff of which the solar system was originally made," he said. Some scientists have suggested that water, an essential element for the development of life, arrived on Earth from comets.

Plans to bring material extracted from the comet back to Earth were canceled when NASA pulled out of a joint mission at an early stage, but the U.S. space agency contributed three of the 21 instruments aboard Rosetta and its Philae lander.

Scientists have already made a number of exciting observations even as Rosetta hurtled through space at about 55,000 kph (34,000 mph) — a speed that required three loops around Earth and one around Mars to gain speed.

Recently-released pictures taken by Rosetta show that 67P has an uneven shape that some have likened to a giant, four-kilometer (2.5-mile) long duck. This could mean that the comet is made up of two formerly distinct objects, or that it was heavily eroded.

Apart from the unprecedented landing, the probe will also be the first to accompany a comet on its journey toward the sun, when 67P will begin to fizz and release the cloud of dust and ice that most people associate with comets.

"We're going to have a ringside seat to see, for the first time, a comet turn into a comet, to develop its tail and explain what for centuries mankind has been puzzled by," Southwood said.

Rosetta is different from NASA's Deep Impact mission, in which a spacecraft fired a projectile into a comet in 2005 so scientists could study the resulting plume of matter. NASA also managed to land a probe on an asteroid in 2001, but comets are much more volatile places because they constantly release dust and gas that can harm a spacecraft.