A U.K. budget airline will create an artificial volcanic ash cloud over Europe this summer to test ash detection technology. The experiment aims to avoid the kind of chaos that paralyzed air traffic during eruptions three years ago. The announcement was made by easyJet, which acquired a ton of ash collected in Iceland by scientists in the months after the 2010 eruptions for its test. 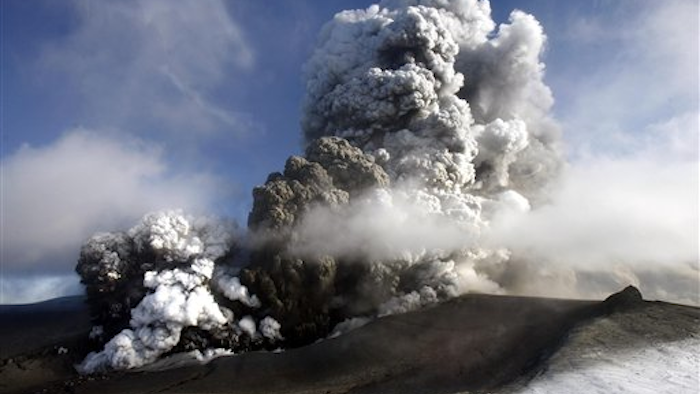 LONDON (AP) -- A U.K. budget airline will create an artificial volcanic ash cloud over Europe this summer to test ash detection technology. The experiment aims to avoid the kind of chaos that paralyzed air traffic during eruptions three years ago.

Thursday's announcement was made by easyJet, which acquired a ton of ash collected in Iceland by scientists in the months after the 2010 eruptions for its test. Air travel was virtually suspended for days in Europe and millions of passengers were left stranded because of fears the ash cloud could disrupt plane engines and was too dangerous to fly through.

EasyJet PLC said it is working with Airbus and Nicarnica Aviation, a Norwegian research company, on developing infrared technology fitted to planes that will feed images of an ash cloud to pilots and control operators on the ground. The U.K.-based carrier said the system, which works like a weather radar for ash, will enable pilots to see an ash cloud up to 100 kilometers (60 miles) ahead of the aircraft. The pilot can then make small adjustments to the plane's flight path to avoid it.

"There is currently no radar technology that can detect ash, and even in daylight the pilot can't see it," said Ian Davies, easyJet's engineering director. "The onboard technology will allow us to give a 3D picture of where the ash cloud is and where it is moving."

To test the technology, an Airbus test plane will disperse a ton of the collected volcanic ash, dried to the consistency of fine talc, into the atmosphere to create an artificial ash cloud in August. A second Airbus fitted with the detection technology will attempt to detect and avoid the cloud at more than 30,000 feet (9,144 meters).

Davies said the experiment will take place over a quiet area yet to be determined, likely in France, and the amount of ash to be dispersed will be "like a teaspoon into the ocean in terms of total amount." Relevant authorities and other airlines will be notified in advance.

If the technology works, it will complement satellite images to give a more accurate image of volcanic ash clouds. That could open up airspace that would otherwise be closed and minimize disruption for travelers, easyJet said.

"We know the (volcanic) activity in Iceland is going to be higher in the next 30, 40 years, and we know there are two volcanoes overdue for eruption," Davies said. "We have got to be more prepared."

In 2010, European aviation authorities reacted to the April 14 eruption at Iceland's Eyjafjallajokul volcano by closing vast swaths of the continent's airspace for almost a week. More than 100,000 flights were grounded, stranding an estimated 10 million travelers worldwide.