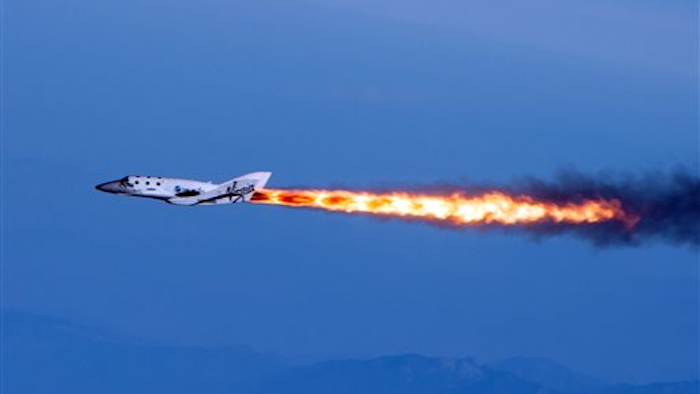 MOJAVE, California (AP) -- Virgin Galactic's SpaceShipTwo made its first powered flight Monday, breaking the sound barrier in a test over the Mojave Desert that moves the company closer to its goal of flying paying passengers on brief hops into space.

The engine burned for 16 seconds, propelling the spaceship to an altitude of 55,000 feet (16,764 meters) and a velocity of Mach 1.2, surpassing the speed of sound. SpaceShipTwo then glided to a safe landing at Mojave Air and Space Port in the desert north of Los Angeles, said George Whitesides, Virgin Galactic's CEO.

The 10-minute test flight was considered a major step for the program.

"Having spaceship and rocket perform together in the air is a long way toward getting into space," said Branson, who watched from the ground. "A few more test flights with slightly bigger burns every time, and then we'll all be back here to watch it go into space."

Until Monday, SpaceShipTwo had only performed unpowered glide flights. Several powered flights are planned this summer, culminating with a dash into space targeted toward the end of the year.

SpaceShipTwo is a prototype commercial version of SpaceShipOne, which in 2004 became the first privately developed manned rocket to reach space. Since the historic flight, more than 500 aspiring space tourists have paid $200,000 or plunked down deposits, patiently waiting for a chance to float in weightlessness and view the Earth's curvature from 62 miles up.

Branson initially predicted commercial flights would begin in 2007, but a deadly explosion during ground testing and longer-than-expected test flights pushed the deadline back.

No date has been set for the first commercial flight from a custom-designed spaceport in New Mexico, but Virgin Galactic executives have said it will come after testing is complete and it secures approval from the government. Branson previously said the maiden passenger flight will carry his family.